The Museum Eckernförde , together with the city archive, sees itself as a (cultural) historical memory of the city of Eckernförde . The museum is run by the city and is housed in the old town hall. The Museumsverein Eckernförde e. V. provides personal and financial support.

The museum's permanent collection shows the history of the city and its cultural, historical and economic features. For example, the results of archaeological and historical urban research and changes to the cityscape will be presented. The section “Bathing life then and now” shows the significant history of the city of Eckernförde as a Baltic seaside resort.

Since 2012, a historical model railway system of the "Eckernförde Railway Friends Meeting" has been on display in the museum. The layout shows the local train station and its surroundings at the time of 1951, when the Eckernförde circular railways were still running and the port still had a siding.

The museum is home to the archives of the painters Carl Bössenroth and Max Linienbach as well as the Immo Wesnigk s electrical collection .

The Eckernförde Museum was founded in 1975 as the Eckernförde Local History Museum and initially had exhibition rooms in the former Willers-Jessen School until the move to the Old Town Hall .

Before that, there were exhibitions on Eckernförde's town history, including materials from the Eckernförde town archive. The first took place from August 15, 1954 to September 5, 1954 in the auditorium of the Eckernförde building school ; 3000 visitors were counted. The exhibition was organized by the school principal and city archivist Hans Jessen , who later also became the first museum director.

The earliest efforts to set up a Eckernförde museum date back to 1906 (proposal to set up a museum room in what would later become the Jungmannschule ), 1909, 1911, 1916 (provision of the St. Johannis-Loge's own collection for a museum to be set up) and 1918 (foundation an association for the collection of exhibits for a local museum). In the 1930s, suggestions followed for the partial use of Clausen's villa (1932; today: Das Haus ), for the use of the Girls' School (1937; today: City Archives) or the Schärff house on Rathausmarkt (1937) as a museum location. In 1960 the merchant Sieck offered the Otte'schen granary, which he owned in 1723, on Langebrückstrasse free of charge for use as a museum building; nevertheless this project failed due to cost reasons.

The Eckernförde Museum has been located in the city's former town hall since 1987. Individual exhibitions in the museum, such as the Forgotten and Ousted exhibition on history during the Nazi dictatorship, were housed outside the old town hall building. 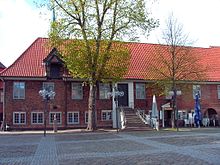 The old town hall, in which the Museum Eckernförde is housed today, is considered to be the most important secular building in the city and is a cultural monument entered in the " Directory of registered cultural monuments of the State of Schleswig-Holstein (except Lübeck) ". The building is also an exhibit of the museum. a. the old town hall of the town hall has been returned to its original size of 210 square meters and 29 meters in length.

The original half-timbered house was built in the middle of the 15th century either as a town hall or an armory . During the first expansion around 1560, the double-arched passage between Rathausmarkt and Kirchplatz was created. In 1588, the 29-meter-long citizens' hall on the upper floor was expanded. It used to be used, among other things, as a meeting room for the council assembly, for the all-rounders of the citizens, for the guilds and guilds, for legal proceedings, for wedding events. Presumably in the years 1760 to 1763 the town hall was extended up to Kurzebrückstraße (now Kieler Straße). The outside staircase was built in 1836/37 according to the design of the Eckernförde Senator and painter Hans Friedrich Baasch .

A council wine cellar has been located on the ground floor since at least the 18th century. The painter Asmus Carstens began an apprenticeship as a cooper or as a wine merchant there around 1770 . Today the "Ratskeller" restaurant is located there.