The Munich clinic Schwabing (formerly Schwabing Hospital ) is a 1909 opened hospital of maximum care (III. Level of care) of the Munich clinic gGmbH in Munich district of Schwabing and academic teaching hospital of the Ludwig Maximilian University of Munich and the Technical University of Munich . The extensive complex in the so-called corridor system in the form of reduced historicism with numerous auxiliary buildings was built in the years 1904–1913 and 1926–1928. It is a listed building. 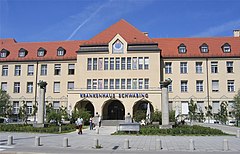 Since 1899, the Munich city administration has bought land for the construction of a hospital in Schwabing. In 1904 Richard Schachner approved the construction plans and construction work began in the same year. On January 18, 1909, the then Municipal Hospital in Munich Schwabing (with the main building, kitchen building and Catholic house church Heilig Kreuz ) with 157 beds started its (somewhat makeshift) operation. The remaining buildings were built in the so-called pavilion style over the next four years . In the year it opened, the tram for the clinic was extended from the previous terminus at Parzivalplatz to Kölner Platz directly in front of the main entrance.

Children's departments were set up from 1915 and this area has been expanded ever since (see children's clinic ).

After the end of the Second World War , the hospital was confiscated by the American occupation forces and operated as a general hospital . An exception was the children's hospital, which the city of Munich was allowed to run on its own. In 1957, after the hospital was returned, the city of Munich began extensive renovation and modernization work. In the 70s and 80s, further clinic buildings were added (e.g. new kitchen building, northern functional building). In 1996 the southern functional building for the operational specialist disciplines and the helicopter landing pad were completed according to plans by Eberhard Schunck . By 1993, the hospital was as Regiebetrieb out of Munich. Then it was into a self-propelled converted and went in 2005 in Munich Municipal Hospital on. With the changeover of the municipal clinic network to a new appearance on October 16, 2018, the name of the Schwabing Clinic in Munich Clinic Schwabing also changed .

In order to increase profitability, the park-like area is to be reduced in size. It is planned to reduce the number of disciplines. Schwabing is to focus primarily on pediatric medicine, obstetrics and gynecology. As a first step in this restructuring, the Clinic for Dermatology, Allergology and Environmental Medicine was relocated to the Thalkirchner Strasse Clinic . It is to be moved back in 2022.

As part of the realignment of the municipal clinic network, construction is being carried out at all Munich Clinic locations . A new building is being built in Schwabing because the old, listed clinic buildings no longer meet the requirements of modern medicine. The groundbreaking ceremony took place in 2016, and the construction project in Schwabing should be completed by 2022. On October 16, 2018, the new building of the clinic celebrated the topping-out ceremony under the new name Munich Clinic Schwabing and presented the new clinic building, the new logo of the clinic network and the future medical concept in Schwabing for the first time. Medicine for children and adults will find their place in the new building, with an interdisciplinary center for internal medicine, surgery and emergency aid for adults as well as a new, larger maternity ward and a center for child and adolescent medicine with children's diabetology, child and adolescent psychosomatics and children's surgery with specialization on severely burned children. On the area around the Munich Clinic Schwabing, in turn, a medical campus is to be built with a wide range of medical services from birth to old age, from prevention to rehabilitation, with general practitioners and specialists as well as affordable and work-related apartments for the clinic staff of the Munich Clinic .

In 1915, children's departments were set up in the various institutions. The children's hospital, which was already included in the original construction plans, opened in 1928. In addition, an existing building was converted into an infection house for children. Shortly before the Second World War, another house was converted into an emergency station due to the great demand.

The Municipal Hospital Munich Schwabing was when it opened as the most modern hospital in Germany. It clearly represents the type of pavilion hospital developed at the end of the 19th century . About 95 percent of the patient's rooms face south. This orientation, the natural light in the connecting paths and the friendly atmosphere through the park with its old trees and a large number of native birds shape the character of the Schwabing hospital.

The Schwabing Clinic is certified according to

In addition, the Schwabing Clinic received the Bavarian Organ Donation Prize in silver and the Federal President's Prize for the integration of foreigners.