The Nachspiel is a short, cheerful and sometimes crude, farcical piece that followed in the European theater tradition until the end of the 18th century after the performance of a dramatic work for the stage. It was a so-called post - comedy , partly with pantomime or ballet . In terms of content, there was usually no connection with the main performance. 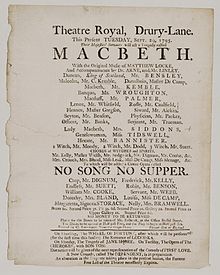 Many different forms of aftermath have emerged in the history of theater :

The first recorded aftermath in German-speaking theater is part of the play Vom Bauern Mopsus, Who Beats His Wife, and dates from 1581. It is in the tradition of the carnival games . The aftermaths were extremely popular with the audience and not only more attractive than the previous great tragedy , but even more popular than the main and state action .

In the course of his attempt at theater reform in Leipzig in 1737, Johann Christoph Gottsched wanted to ban the Hanswurst from the stage as the main actor, in an aftermath written for it. However, he could not prevail and recommended that instead of the improvised, often from which impromptu played burlesque dramatic crafted one-act like the pastorals . However, these did not establish themselves; In 1757, after a performance of Gotthold Ephraim Lessing's bourgeois tragedy Miss Sara Sampson (1755) in Lübeck, the ballet pantomime Der Pantalon und Pierrot was cheated by the Arlekin . Even in the heyday of the Hamburg Entreprise (1767–69), there was a comic sequel to important dramas like Nathan the Wise . Only at the end of the 18th century did the theater practice of aftermaths end.

From 1822 to 1824 Karl von Holtei published the Jahrbuch deutscher Nachspiele , which was then called the Yearbook of German Theater Plays until 1844 (and was published from 1832 with the help of Friedrich Wilhelm Gubitz ).

Postplay as part of dramas

Not to be confused with this tradition are epilogues that are thematically related to the main piece, such as the allegorical interpretations of the Jesuit dramas , and the dramatic epilogue, which offers an addendum or an outlook from the play, including Arthur Miller's Death of a Salesman (1949) and Max Frischs Biedermann und die Brandstifter (1958), combined by Pavel Kohout in his one-act plays with preliminary and intermittent plays. This form of epilogue emerged only in the 19th century, for example in Friedrich de la Motte Fouqué's The Siege of Byzantium or Greek Fire (published posthumously in 2004).