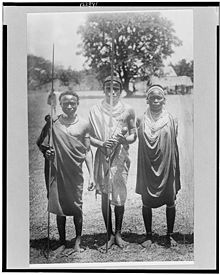 Nandi athlete Kipruto Kirwa , winner of the Hamburg Half Marathon 2009

At the end of the 19th century , the people had probably reached the strongest position in their history. The Nandi were feared among the Swahili - Arab traders on the coast and the first European agents of the establishing colonial rule. They had a reputation for being cruel and daring warriors. They lived in the hill country northeast of Lake Victoria . With around 14,000 men, around 4,000 of whom were capable of weapons, it was a rather smaller group, which, however, caused considerable difficulties for the colonial rulers. They did not live in villages, but distributed over farmsteads whose men joined together in districts, e.g. B. to carry out raids against the livestock of their neighbors. Parts of the population also lived in well-protected caves on Mount Elgon up to an altitude of 1,800 m. Unmarried people lived in community. They did not have a common political leader, but medicine men ( orkoiyot ) sometimes enjoyed considerable influence.

As early as 1897, they repeatedly offered armed resistance, which smaller British punitive expeditions were unable to put down. The Nandi have resisted any changes in their lifestyle up to the present day and have long been considered notorious xenophobes. In the past, the Nandi had elected tribal and war leaders. The most famous was Koitalel , who waged a bloody war against the British until 1905, which then culminated in the Nandi expedition . They resisted the construction of the railway across Nandi Land ( Uganda Railway ). Railway tracks were torn out and sunk into Lake Victoria, or made into spear and arrowheads, and jewelry was made from the telegraph cables of the British.

In 1906, the Nandi were forced within a few weeks in a cruel resettlement operation from their area to a reservation on the Ravine River . After large parts of their livestock had already been confiscated during the Nandi expedition carried out immediately before, the harvest supplies and fields were burned and the villages destroyed during the resettlement.

To this day, the majority of them live around the city of Eldoret and along the Nandi Mountains north of it. The area belongs to the Kenyan highlands, the people live at between 1500 and 2200 m altitude, where there is a healthy climate - many Nandi live to an old age.

Traditionally, the Nandi were cattle breeders and only reluctantly and under pressure from the colonial rulers turned to agriculture after they had destroyed a large part of their farms and animals in 1906.

Today they proudly point to the milk production in their region, which is the highest in Kenya. The traditions are somewhat similar to the Maassai , just as they drink fresh blood from Nandi. This tribe has very conservative customs. Premarital intercourse , promiscuity (changing partners), and divorce are considered very dishonorable. There is strong respect for the tribal elders; Parents are adored. Beating children or wives is frowned upon. The Nandi believe in a mythical creature, the “chemosit” (also called “Nandi bear”), a predator half hyena / half lion . Children who do not come home in the evening are persuaded that the “chemosite” would take them away if they weren't home before dark.

The Nandi worship several gods, including the god Asis and the thunder god Ilat . In the 21st century , however, the majority are Christian , with some becoming followers of Islam .