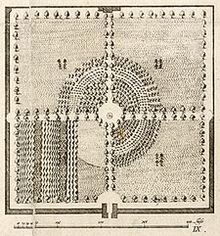 Plan of the new burial ground in Erdmannsdorf (around 1787)

The New Burial Ground in Dessau is a cemetery in Dessau created by Friedrich Wilhelm von Erdmannsdorff from 1787–1789 .

The plant is now in Dessau as a Historical Cemetery I known. It is located between Friedhofstrasse and Chaponstrasse (main entrance) not far from August-Bebel-Platz.

At the time of its creation, the new burial ground was at the Askanischer Tor outside the city. It is one of the first communal cemeteries that was not created around a church. The entrance portal is adorned with the inscription "Death is not death, is only ennobling mortal nature". The cemetery was laid out as a regular, strictly symmetrical cemetery, the square area of ​​which was accessed by a cross with a central roundabout. The central lawn was initially free of tombs. In the outer wall there are burial niches with inscriptions. The strictly geometrical layout with its open inner surface differed significantly from the narrow, often disordered structures of the church cemeteries of the time. The cemetery was open to all Christian denominations.

The new cemetery was highly praised by contemporaries of the 18th century. Places in the cemetery were very popular. There is even talk of funeral tourism to Dessau.

Mausoleum of the family of Prince Putyatin

Impressed by the facility, Prince Nikolai Abramowitsch Putjatin , who lives in Kleinzschachwitz near Dresden , asked for permission to build a mausoleum here. The small temple-like building made of Crottendorfer marble (according to the Prince's own plans) is located in the western wall of the complex. Since the prince's stepdaughter was buried as early as 1799, the mausoleum is called "Dem Theuren Kinde". The remaining verses and the appropriate funeral music in E flat major convey an impression of the family's grief. Today the prince and his wife rest next to her. Their grave tablets originally framed an ancient flaming sacrificial altar, which was broken off in 1852.