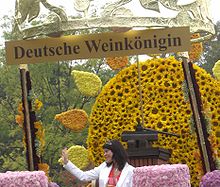 ... and the Palatinate Wine Queen

The Neustadt winegrowers' festival takes place every year in October in the Palatinate town of Neustadt an der Weinstrasse . The pageant is the origin of the German wine harvest festival and, carried out on its second festival Sunday, is also considered to be the highlight.

On October 24, 1909, winegrowers from Neustadt organized a festive procession for the first time on the occasion of a harvest celebration. In 1913, the second pageant took place as part of a Palatinate Wine Day, the most beautiful floats were awarded prizes, and there was a public wine tasting and auction in the hall . The procession paused between 1914 and 1927 because of the First World War and its economic consequences. In 1928 the tradition was continued with the Palatinate Wine Week . In 1929 the first vintage festival was celebrated under this name, in 1931, initiated by the Neustadt publisher Daniel Meininger (1876–1964), a Palatinate wine queen was elected for the first time .

As a result of the Second World War , the festival was suspended from 1939 to 1948. From 1949, the move was combined with the election of the German Wine Queen , whose office was newly created that year. Because Neustadt was then (and until 2000) the seat of the administrative district of Palatinate , from 1969 Rheinhessen-Pfalz , the German wine harvest festival that arose in this way continued to radiate and finally became known throughout Germany thanks to the mass media . In 1960 a wine village was added on the station forecourt, which got its Palatinate name " Die Haiselscher " after the little houses in which the catering takes place.

The Romans and their god Bacchus

With up to 150 train numbers - for example, floats, music bands and traditional groups - and 150,000 to 200,000 daily visitors, the Neustadt winegrowers' festival is the largest such event in the world. The Offene Kanal Weinstrasse broadcasts the parade live from the train route, and Südwest-Fernsehen broadcasts the recording every evening.

In the design of train numbers of winemakers profession is often on the history resorted, was asked in the earlier manual labor and transportation instead of carts and wheelbarrows were used. The Romans , who brought the grapevine to the Palatinate in the 1st century AD , and especially their wine god Bacchus, are also represented with pleasure. The pageant floats of the Germans and the Palatinate Wine Queen are always optical eye-catchers . These two representatives of German and Palatinate wine will be newly elected during the grape harvest festival.