Nicolas Beauzée (born May 9, 1717 in Verdun ; † January 24, 1789 in Paris ) was a French linguist, author of the Grammaire générale published in 1767 and one of the main contributors to the Encyclopédie by Denis Diderot and Jean-Baptiste le Rond d'Alembert for the Subject area grammar . In 1772 he was appointed to the Académie française to succeed Charles Pinot Duclos .

Early years and employment at the Royal Military Academy

Today's appearance of the Ecole royale militaire , one of Beauzée's workplaces in Paris. The main building shown here was only built between 1768 and 1772.

Beauzée was born in Verdun on May 9, 1717 . The parish register of the parish of Saint-Sauveur shows his father as a worker ( manouvrier ). A scholarship enabled him to attend the Jesuit College in Verdun from 1731 to 1739 .

In the 1740s Beauzée lived in Paris for some time before returning to Verdun in 1747. There he lived in poor conditions until he went to Paris again through the mediation of the influential writer Fontenelle and in 1753 took up a position as a teacher of grammar at the royal military academy Ecole royale militaire, which had been founded two years earlier to train the sons of impoverished nobles . Although his job saved Beauzée, his wife and four children from poverty, his rank was upgraded and downgraded several times, leaving his financial situation uncertain.

Beauzée as a contributor to the Encyclopédie

When César Chesneau Du Marsais , who had previously worked on grammar for the Encyclopédie , died in 1765 , Beauzée continued his work with his colleague at the Ecole royale militaire Jacques-Philippe-Augustin Douchet . Kafker rates Beauzée's participation in a freethinking book like the Encyclopédie as “surprising”, since Beauzées in his first and only publication with the title Exposition abrégée des preuves historiques de la religion chrétienne, pour lui servir d'apologie contre les sophismes de l 'irréligion (such as: Brief presentation of historical evidence for the Christian religion, as a defense against the fallacies of irreligion ) took traditional positions.

For the seventh volume of the Encyclopédie , published in 1757, Douchet and Beauzée wrote a total of thirteen contributions, of which at least three - Gallicisme , Genre and Grammaire - can be attributed to Beauzée (the articles written by Beauzée together with Douchet are given the author's abbreviation "ERM"; in which Beauzée appeared as the sole author are marked with "BERM"). Douchet then stopped working, to which Beauzée noted with relief:

"My thoughts, forced by the competition of those of my colleagues and by the consideration to which our association obliged me, could not and should not develop with the full fluency that makes undivided freedom possible."

After Douchet's departure, Beauzée wrote more than 125 named and around 20 anonymous articles for volumes 8 to 17 of the Encyclopédie .

Although Diderot - as Kafker rightly points out - may have been irritated by articles such as Langue and Nom , in which Beauzée advocated the thesis of the divine nature of language, he nevertheless assessed his work positively. He wrote that Beauzée was undoubtedly the "most adroit, honorable and most respected man" of the Ecole royale militaire and that his contributions to the Encylopédie were in no way inferior to those of his predecessor Du Marsais.

The article négation from the encyclopedia by Diderot and D'Alembert. Nicolas Beauzee, as the author of the article, distinguishes between private words, mots privatifs and negative words, mots négatifs . 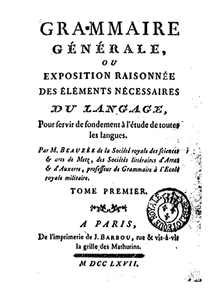 Beauzée's main work, the two-volume Grammaire générale ou exposition raisonnée des éléments nécessaires du langage, pour servir de fondement à l'étude de toutes les langues , was published in 1767, based in part on Beauzée's contributions to the Encyclopédie . It was a universal grammar in the spirit of Antoine Arnauld and Claude Lancelot . Beauzée can be seen as the founder of the language typological approach. When justifying his theory, Beauzée tried, as far as he was able, to have a sound empirical basis.

"Beauzée's intellectual accomplishments showed a high degree of sophistication and gave expression to insights which have re-emerged in a clearer form as significant and lasting developments only within the present century."

"Beauzée's intellectual achievements showed a high degree of perfection and brought to light insights as they have only reappeared in a clearer form as significant and lasting developments in this century."

The majority of Beauzée's contemporaries were impressed by the work. The Habsburg monarch Maria Theresa sent the author a gold medal for sending a copy, and Beauzée's position at the Ecole royale militaire also became more secure. In 1768 he was accepted into the Accademia della Crusca . Notwithstanding this, Diderot judged that the Grammaire générale lacks clarity in its presentation and tastes in the selection of examples.

Work as editor and translator

After the publication of the Grammaire générale , Beauzée worked in a variety of ways as an editor and translator. In 1769 he published Abbé Gabriel Girard's Synonymes françois , in 1787 Thomas à Kempis ' De imitatione Christi and Isaac Newton's Optics in the translation by Jean-Paul Marat . Beauzée himself translated the Historiae Sallusts , the Historiae Alexandri Magni of the Roman historian Quintus Curtius Rufus and à Kempis' Four Books of the Imitation of Christ . For the three-volume Grammaire et littérature by the French writer Jean-François Marmontel , he contributed revised articles from the Encyclopédie .

Admission to the Académie française and final years

After several unsuccessful attempts, Beauzée was appointed to the Académie française in 1772 to succeed his friend Charles Pinot Duclos . Only the fact that Louis XV. had previously rejected two other candidates, clouded his success. Influential circles of the French court tried to keep the philosophes out of the Académie and Beauzée was - despite his authorship for the Encyclopédie - as a sure candidate. His inaugural address reflects his attitude towards Catholicism and royalty: Beauzée described language as the “natural basis of religion” ( base naturelle de la Religion ) and Louis XV. was praised by him as the "best of kings" ( meilleur des Rois ).

The statements about Beauzée's attitude towards the French Revolution are contradictory. While the Abbé Molleret puts him in a row with the Marquis de Condorcet and Nicolas Chamfort and other academicians who "were revolutionaries with all the power of the word" ( étaient révolutionnaires dans toute la force de ce mot ), this does not coincide with the Statements by Chamfort, Rivarol and others of his contemporaries, which characterize him as a scholar who was primarily concerned with his work. In addition, Béauzee died as early as January 1789, when the French Revolution was just beginning.