Nikolaus Nievergalt (also: Niklas Nievergalt, Nifergalt, Nievergolt) (* around 1445 in Speyer ; † before February 18, 1511 in Worms ) was a painter and councilor who can be traced back to Worms between 1483 and 1511 , whose work is difficult to grasp.

Nikolaus Nievergalt came from a ramified family of goldsmiths and painters in Frankfurt am Main and Speyer. Hans Nievergalt founded a painting workshop in Speyer before 1400 and it was continued by Peter Nievergalt until at least 1449. Nikolaus Nievergalt was the son of Peters and emigrated to Worms, where he can be identified for the first time in 1483. Here he set up a painting workshop that received important orders. In 1495 Nievergalt lived in the house at Zum Schlüssel in Worms. He was related by marriage to the Heidelberg court painter Master Ludwig and the Heidelberg court singer, poet and doctor Johann Steinwert von Soest .

Nievergalt is described with great praise in various text sources from later times. In the 17th century, the Strasbourg merchant Balthasar Künast owned a portfolio with “torn and drawn things by famous painters” and also mentions “Nyfergald von Worms”. The Worms Chronicle by Friedrich Zorn, which was completed around 1570, names the “famous master Nicolaus Niwergolt” as the author of the wall paintings on the “coin” from 1493 . 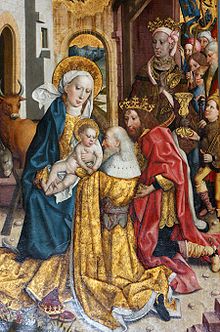 A possible work by Nievergalt: Adoration of the Magi on the Boßweiler Altar, around 1505

Current art-historical research identifies the remains of the surviving work of a painting workshop that must have been active in Worms between around 1490 and around 1510. It is the so-called Wolfskehler Altar from the time around 1490/1500, which is now in the Evangelical Church of Wolfskehlen , and the so-called Boßweiler Altar from the period after 1505, which is said to come from a Worms church. The complex of works is carried under the emergency name of the master of the Wolfskehler Altar. It should be considered whether works by Nikolaus Nievergalt have not been preserved because there are no other painters' workshops in Worms for this period.

The art historian Walter Hotz has tried in the 1950s, Nievergalt the house Buchmeister to identify. This thesis has been largely rejected and is hardly pursued any further.