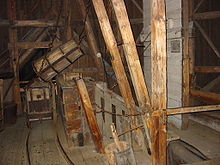 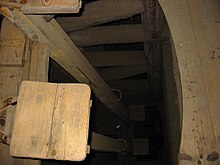 View into the shaft of the show mine with driving skills

Entrance to the visitor mine

The Upper Harz Mining Museum is a museum for technology and cultural history in Clausthal-Zellerfeld . It is one of the oldest technology museums in Germany and focuses on the representation of the Upper Harz mining industry up to the 19th century.

The museum is located in the center of the Zellerfeld district . Among other things, you can see:

The history of the mining museum began in 1884, when the then mining captain Adolf Achenbach issued a directive calling on the miners to bring special disused equipment from historical mining to a collection to set up a museum. In 1892 it was officially founded as a museum for the Zellerfeld district .

After the merger of the previously independent towns of Zellerfeld and Clausthal to form the twin town of Clausthal-Zellerfeld in 1924, the vacated Zellerfeld town hall was relocated and the museum reopened on October 8, 1928 on the occasion of the 58th general meeting of the Harz Association for History and Archeology . In the following years, the outdoor area with the show mine was also built.

In the 1960s and 1970s, the museum was headed by Herbert Dennert . In these times until the end of the 1980s, the mining museum had six-digit annual visitor numbers. From around 1990 the number of visitors fell significantly for various reasons (e.g. declining tourism in the Upper Harz, but also significantly more competition from other mining museums in the Harz). Nevertheless, 5.5 million people have visited the Upper Harz Mining Museum to date.

The mining and university town of Clausthal-Zellerfeld owns the Upper Harz Mining Museum . The sponsor is the Upper Harz History and Museum Association, which has ceded the operation of the museum to the Rammelsberg Mine Foundation, Old Town of Goslar and Upper Harz Water Management since 2013. Deficits are covered by the city, the district and, on a small scale, by the foundation.

As a branch, the museum operates the above-ground pits of the disused mines Ottiliae-Schacht and Kaiser-Wilhelm-Schacht as well as recently uncovered parts of the facility (round wheel room and others) of the Rosenhof mine .

The museum also lends an electronic guidance system "E.guide EMIL", which points out and explains the traces of the miners on a walk through disused mining landscapes .