The Olympic Peninsula ( English Olympic Peninsula ) is a peninsula in the northwest of the US state Washington . It is surrounded to the west by the Pacific Ocean , to the north by the Juan de Fuca Strait and to the east by Puget Sound . In the south, the Chehalis River is considered the border of the peninsula. Seattle , the largest city in the region, is located on Puget Sound, across from the peninsula , in southeast Olympia , Washington, the state capital.

The geography of the peninsula is characterized by the long coastline and the Olympic Mountains with Mount Olympus (2428 m) as the highest point. There are numerous rivers and lakes in the mountain range. 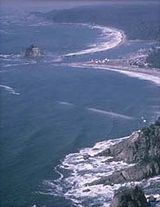 Remnants of the once predominant temperate rainforest can be found on the slopes of the Olympic Mountains . The two largest stocks are Hoh Rain Forest and Quinault Rain Forest in Olympic National Park . About half of the peninsula belongs to this national park. It is made up of the core of the Olympic Mountains with the rainforests and a narrow natural strip of the Pacific coast. The entire coast is also protected as the Olympic Coast National Marine Sanctuary .

Other sanctuaries on the peninsula include the Olympic National Forest with several wilderness areas, as well as a number of smaller state parks: Anderson Lake , Bogachiel , Dosewallips , Fort Flagler , Fort Worden and Fort Townsend .

The US Highway 101 surrounds almost the whole of the eastern, northern and western coast. Which are on the west coast reserves the Makah and - Quinault -Indianer. The island of Tatoosh Iceland is the westernmost point of the contiguous territory of the United States of America and is named after a Makah chief.

The Naval Base Kitsap is located on the peninsula .

Due to the low annual hours of sunshine, the area around the park was chosen by the author Stephenie Meyer as the setting for her vampire saga " Twilight ".