The oryx weaver ( Euplectes orix ) belongs within the family of weaver birds (Ploceidae) to the genus of fire weavers ( Euplectes ).

Oryx weaver in South Africa, front and back views

The somewhat squat oryx weavers are 12 to 14 cm tall, the females are slightly smaller. Both sexes look very similar to the house sparrow ( Passer domesticus ) in terms of color . The basic color is ocher brown, on the back they are darkly striped and the belly is shaded light gray. They have a light yellow-brown supercilium. The thick, conical beak is horn-colored. Fledglings have wide, light-colored edges on their wing feathers .

They sing all day long, their call sounds like a "tsip".

The oryx weavers are found in colonies all over South Africa , Botswana , Namibia , Zimbabwe and Mozambique with the exception of northern Namibia, central Botswana and a narrow strip in western Zimbabwe and northern transvaal . However, it only breeds in the Etosha pan . They colonize open terrain and wide grasslands , mostly not far from the water.

They feed mainly on grass seeds. Insects also make up part of their diet every now and then. 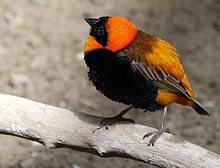 The male oryx weavers change their plumage during courtship . They then have bright orange to scarlet plumage, while the front head and the belly turn black. The wings and tail, however, remain ocher brown. The beak also turns black. The male's courtship songs are very high-pitched beeps, performed while sitting on high blades of grass, and in between they puff themselves up again and again. They also perform slow hover flights.

The oryx weavers "weave" their round nests in reeds , tall grass, in the bank vegetation, in corn or sugar cane fields . The nests have a side entrance. The female lays around three to five eggs. The male leaves the breeding and brood rearing to the female alone. The young birds hatch after a breeding period of two weeks and leave the nest after another two weeks.