Gold cuckoo, front of a male

The gold cuckoo ( Chrysococcyx caprius ), also Diderik or Diederik cuckoo , is an African species of cuckoo. The name "Diderik-Kuckuck" refers to the singing of the male ("dee-dee-dee-dee-derik"). The call is one of the characteristic sounds of the African bush, as the golden cuckoo is the most common type of cuckoo in Africa.

The golden cuckoo is an obligatory brood parasite and shows numerous behavioral adaptations to this characteristic, which can also be observed in the cuckoo found in Central Europe . Individual females specialize in individual host bird species, a trait that is passed on through the female line, similar to the Eurasian cuckoo. The most important host bird species belong to the weaver birds , a family that is otherwise only used by the white cuckoo and the emerald cuckoo as occasional host bird species.

There are no inventory data for the golden cuckoo, however, due to the large distribution area and the frequency of the species, the IUCN does not assume any endangerment .

The gold cuckoo reaches a body length of up to 19 centimeters. The males weigh between 24 and 36 grams, the females between 29 and 44 grams.

The sexual dimorphism is very pronounced in this cuckoo. The plumage of the male is shiny green on the upper side, the wings have white stripes. The chest and belly are also white, while the flanks are speckled green to varying degrees. The male's iris and orbital ring are red; the supercilium is white. The male golden cuckoo is easy to identify with its green and white plumage. There is only a possibility of confusion with the Klaaskuckuck belonging to the same genus .

The female is colored shiny brown on the upper side, the throat is reddish brown and the flanks are sparged brown. The sparrowing is more pronounced in the females than in the males. The iris is hazelnut brown to gray. The orbital ring in females is gray.

Fledglings are similar to females, but the brown part of the plumage is more reddish-brown in some individuals than shiny brown as in the female. The young birds are sparrowed on the throat and this sparrowing changes into the sparrowing on the belly, the flanks and the underside of the tail. The beak of many young birds is coral red and only becomes dark with increasing age.

The golden cuckoo is an afrotropic species, and it can be found all year round along the Gulf from Guinea to Ethiopia , as well as to the Democratic Republic of the Congo and Tanzania . It is a migratory bird in the regions north and south of this region. Its migration to these breeding areas usually coincides with the rainy season there. Another temporarily occupied breeding area is on the border of Yemen and Oman . In the rest of Sub-Saharan Africa , as well as along the Sahel zone , the golden cuckoo only occurs during the breeding season. In the extreme south of the African continent, it can be observed from mid-October to November. It usually leaves this region in March, but a few golden cuckoos can still be observed in May.

The golden cuckoo lives in many different habitats , but it generally resides in more open habitats than other African cuckoos. It can be found in evergreen forests, dry forests , open savannahs as well as in wetlands with large stands of reeds. He also colonizes anthropogenic habitats such as gardens and plantations . It occurs at altitudes of up to 2000 meters above sea level, but the golden cuckoo is only common in regions below 1200 meters above sea level. He also avoids arid regions that lack permanent water points.

The gold cuckoo is a comparatively conspicuous bird for a cuckoo. It usually looks for food in the treetops, more rarely on the ground. Prey animals are usually hit against branches and the intestinal contents removed before the prey is swallowed.

The gold cuckoo's main food is insects , mostly caterpillars that are pecked by leaves or the ground. Seldom, seeds are also consumed. Most of the caterpillars that the golden cuckoo eats are not hairy. In the case of golden cuckoos, in which the stomach contents were examined, one also found mostly hairy caterpillars that are not eaten by other birds. The feeding of hairy caterpillars is very often observed with cuckoos. The diet also includes grasshoppers, termites, fire bugs , adult butterflies, butterfly pupae and beetles. In the stomach contents there were also such butterflies that are not normally eaten by birds because of their unpleasant taste. While adult golden cuckoos are almost complete insectivors, the nestlings are raised by host bird species that mainly eat seeds.

In Equatorial Africa , the region where the golden cuckoo is a resident bird, there is no specific breeding season: the females are able to lay eggs all year round. Often, however, rain triggers increased oviposition. Outside of Equatorial Africa, however, breeding seasons can be distinguished. In the north of Senegal, eggs are laid between August and October and in Nigeria between January and October. In Ethiopia, however, egg-laying gold cuckoos are observed in the period from June to September.

The golden cuckoo as a breeding parasite

Male golden cuckoo, clearly recognizable the sparrows on the sides of the body.

In some regions, the male of the golden cuckoo defends a colony of weaver birds as his territory by driving other males out of this territory and letting his call be heard from conspicuous stand guards. It also signals its territory ownership through conspicuous flight maneuvers, during which it glides through the air in an arc with its wings raised high. This is followed by a flight phase in which it flaps its wings again. There are often arguments with neighbors in the area where the calls of the males can be heard and there are chases in which several male and female golden cuckoos are involved. Territories are between 4 and 5 hectares in size. In many cases, however, the weaver colonies are too large and attract too many gold cuckoos, so that there is no longer any territorial defense.

The females of the gold cuckoo are able to lay an egg every other day and only lay one egg in the host bird's nest. Research suggests that they can lay between 16 and 21 eggs in total during the 10 week breeding season. Similar to the cuckoo, the females specialize in individual host bird species and lay an egg that is very close to that of the host bird in size and color. They also share this characteristic with the Eurasian cuckoo.

As is typical for tropical birds, the host birds of the golden cuckoo lay clutches that normally consist of two to three eggs. Similar to the Eurasian cuckoo, the golden cuckoo can only parasitize if it lays the egg at the right time: there must already be at least one egg in the clutch, but the clutch must not yet be complete. Since bird species in the temperate climate zone have clutches that are usually twice as large, the golden cuckoo has a much shorter time span than the Eurasian cuckoo to lay its egg in the host bird's nest.

The females of the golden cuckoos watch the nests of the host birds from nearby stand guard in order to find the right time to lay their eggs. The female then flies very quickly to the nest that has been spied out, picks up an egg from the clutch with her beak and then lays her egg into the nest within a few seconds. This rapid oviposition is a typical feature of brood-parasitic bird species: host bird species often give up their eggs when they observe cuckoos at the nest. They also often react aggressively to the cuckoos. In at least one case it has been proven that a mask weaver killed a full-grown male golden cuckoo.

The nestlings of the golden cuckoo hatch after a breeding period of 11 to 12 days. They usually leave the egg one to three days earlier than their nest siblings. Only on their second or third day of life do these nestlings begin to throw the eggs that have not yet hatched in the nest or the other nestlings out of the nest. Young cuckoo birds do this within the first hours of life - the difference in behavior is explained by the fact that a nestling of the Eurasian cuckoo is several times larger than its nest siblings. However, the size advantage of the gold cuckoo nestling is only between 15 and 50 percent. It seems that golden cuckoo nestlings have to grow a little before they can eliminate their food competitors. At the same time, throwing eggs and nestlings out of a ball nest is more difficult than out of an open nest in which the Eurasian cuckoos usually grow up.

Oryx weaver , one of the host bird species of the gold cuckoo 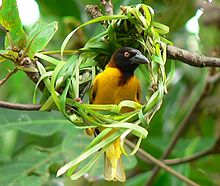 Males of the village weaver building a nest

In South Africa, where the behavior of the golden cuckoo has been studied particularly well, six bird species are the most important hosts for this species. The eggs of these host bird species differ in their size and color, the adaptation of the golden cuckoo to the respective host bird happens by the pigmentation of the Egg shells in their chemical composition ( biliverdin and protoporphyrin in different proportions) is replicated by the cuckoo.

The golden cuckoo is a common bird in large parts of its range. It tolerates changes in its habitat caused by humans and not only uses the eucalyptus, which have been introduced in Africa, as a hideout, but is also often found in suburbs.