The trip to Tokyo

The trip to Tokyo ( Japanese 東京 物語 , Tōkyō monogatari ) is a Japanese film from 1953 . This film is considered the best-known work by director Yasujirō Ozu and is often referred to as one of the best films of all time. The main roles were played by Chishū Ryū and Chieko Higashiyama .

The elderly couple Shūkichi and Tomi Hirayama live with their youngest daughter, the primary school teacher Kyōko, in the port city of Onomichi . The four other children are long gone: the eldest son Kōichi and the eldest daughter Shige live married in Tokyo , the middle son Shōji was lost in World War II and most likely dead (his wife Noriko also lives in Tokyo), and the youngest son Keizo is a businessman in Osaka . One day the couple decides to visit their relatives in Tokyo and embark on the long train journey.

After their arrival in Tokyo, the couple stayed with their son Kōichi, his wife Fumiko and their two children - whereby the older child was immediately upset that his desk had to be put away for the grandparents' sleeping place. Upon arrival, it turns out that Kōichi, a doctor, and Shige, who runs a beauty salon, have little time for them. So Shige asks Noriko, the middle son's widow, for her help. Although Noriko has a strenuous office job that has to finance her small apartment and her single life, she takes her time. She takes them on a sightseeing tour and then invites them to their apartment.

After only a few days in Tokyo, Kōichi and Shige pay for their parents to stay in an onsen so that they do not have them with them. In the onsen, however, the elderly feel disturbed by the nightlife with partying young people, so they return to Tokyo shortly afterwards. The couple do not want to be a burden to Kōichi and his family again, Shige is surprised by their quick return and has no place, which is why they have to look for other accommodation. Tomi spends the night at Noriko's and thanks them for their efforts, while Shūkichi spends an evening in a pub with their long-unseen friends Sanpei and Osamu. Sanpei says that Shūkichi raised his children correctly because they are successful, but Shūkichi is not really satisfied. At night he is brought drunk to Shige and her husband Kurazō. Shige, who previously denied her parents as “country relatives” in front of a customer, is upset about her father's drunkenness - statements from her and Tomi suggest that Shūkichi used to drink more often, but he has had many since then Years actually haven't touched any alcohol.

The parents leave earlier than planned for the return journey and comment on the changes their children have made, but do not blame them because they have a lot to do. On the way back to his hometown, Tomi falls seriously ill, which is why the trip has to be interrupted with the youngest son in Osaka. Back at home, Tomi's condition worsens and the children rush to their mother's deathbed. Only the youngest son Keizo, who received the telegram late because of business, comes too late and blames himself.

After the funeral, all the children leave as soon as possible, only the daughter-in-law Noriko and the youngest daughter Kyōko stay behind with Shūkichi. Kyōko is upset about the selfishness of her siblings, who quickly disappeared and - in the case of Shige - would have asked for souvenirs of their mother immediately after the funeral. Noriko understands them, but also defends the siblings: An increasing gap between parents and children, once they move out and start building their own lives, is usually inevitable - something Kyōko may find out later when she gets married and moves out. Noriko eventually has to return to Tokyo. Before leaving, Shukichi tells her that he felt better treated by her than by his own children, and gives her his late wife's watch. For the first time Noriko confesses her own loneliness and her desire for a change in her life. Shukichi tells Noriko, like Tomi before, that he has no hope of his son's return and that Noriko can therefore marry again. 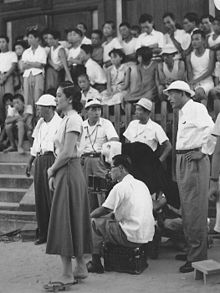 The trip to Tokyo was influenced by Leo McCarey's American drama No Place for Parents ( Make Way for Tomorrow , 1937), which Ozu's screenwriter Kōgo Noda saw in the cinema. Noda proposed a Japanese adaptation of the plot Ozu, who is said to have never seen Make Way for Tomorrow . Nevertheless, structural and content-related similarities can be found, so in both films the old married couple is pushed from one household of children to the other and the parents are seen as a burden. The cyclical course of life is reflected in them with a lot of sadness, but also with occasional humor. While McCarey's film is set in the Great Depression and also shows financial hardship, Ozu's film is set in a boom phase in post-war Japanese society - despite or precisely because of this, there are tensions between parents and the generation of children, in which the duties of business affect the family Leave the background behind and lead an increasingly “western” way of life.

Today, The Trip to Tokyo is Ozu's best-known film, although he considers it his most melodramatic film. The film also exemplifies Ozu's unique visual style, which at first glance still takes some getting used to. This style is characterized by the low camera perspective of the view from below , the stationary camera, which shows what is happening in a fixed frame (there are only two tracking shots in the whole film ), and the frontal shot and reverse shot in dialogue scenes. Just as typical are landscape shots with music, which separate the individual scenes from one another and yet connect them.

Another constant in Ozu's work is the use of the same actors in his films. Chishū Ryū and Setsuko Hara were among his favorite actors. Hara played a character named Noriko in three different films from 1949 to 1953 . Although not the same person in these films, Late Spring ( Banshun , 1949), Wheat Autumn ( Bakushū , 1951), and Journey to Tokyo are considered parts of a trilogy (Noriko Trilogy). In all three films, a generation conflict and the question of whether Noriko should be (re) married play a more or less important role. Seldom, however, has Ozu portrayed the differences between the older generation and the youth as melancholy as in The Journey to Tokyo . The final words of the dialogue between Noriko and Shukishi's youngest daughter are as sad as they are resigned: "Life is a disappointment" - "That's how it is."

Yasujirō Ozu is considered to be one of the most important Japanese directors today, but in the 1950s, when Japanese cinema was discovered by Western audiences through the success of Kurosawa's film Rashomon , his films were considered too typically Japanese for the film to be understood abroad could. Although Die Reise nach Tokyo was shown at various festivals (and was awarded a prize by the British Film Institute in 1958 , among others ), it was not until years after Ozu's death (in 1963) that his films were in Europe and the early 1970s United States discovered. In Germany, the film was first seen in cinemas on July 9, 1965, and premiered on television on November 3, 1970 on ARD .

The trip to Tokyo is now regarded by many critics not only as Ozu's most important, but also as one of the best films of all time. In 1992, the British film magazine Sight & Sound polled famous directors and critics for the first time in the top 10 best films of all time. In 2012, Die Reise nach Tokyo was finally voted best film by the film directors surveyed. As early as 2005, the film guide Halliwell's Film Guide led the film as the front runner on the list of the 1000 best films.

“The internationally best-known film by the Japanese master director Ozu: a careful study, unfolded in a meditative rhythm of images, about the breakup of a family, about the encounter between tradition and modernity, about the daily courage to start again. Beyond spectacular effects, Ozu provides a description of normality, the contradictions of which are neither dramatized nor concealed, but opened up to careful observation and critical sympathy. "

“The relationship between the generations in a masterfully crafted film with a very idiosyncratic Japanese style. Highly recommended for ages 14 and up. "

At the Berlinale 2013 a remake called Tokyo Kazoku (eng. Tokyo Family ) by director Yōji Yamada (with Yū Aoi in the role of Noriko) was shown.