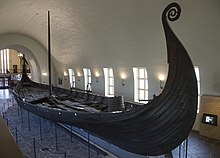 The Oseberg ship in the museum

The Oseberg ship was found in 1904 under a burial mound on the Oseberg farm, a farm on the western bank of the Oslofjord between Tønsberg and Horten in Norway , and excavated by the Swedish archaeologist Gabriel Gustafson and his Norwegian colleague Haakon Shetelig 1904–1905. Two women were buried behind the mast of the ship in a burial chamber built in 834 . It was the third significant Norwegian find after the Tuneschiff in 1867 and the Gokstad Ship in 1870. The Oseberg ship is still the richest and most important find from the Viking Age .

Excavation site of the Oseberg ship

The discovery of the Gokstad ship in 1880 triggered an increased search for comparable burial sites in Norway. In contrast to other sites on the Oslofjord, there was no oral tradition that described the site on the Oseberg farm as a burial site. The little hill was known locally as " Revehaugen ", a place where foxes stayed. The farmer Oskar Rom, under the impression of the great attention that the Gokstad ship had attracted nationally and internationally, had carried out some excavations on this hill and found things which he thought were of interest to an archaeologist. On August 8, 1903, he traveled to Oslo, then still known as Kristiana, to show his findings to Gabriel Gustafson.

Gabriel Gustafson initially reacted skeptically to Oskar Rom's assertion that he had found another Viking burial place, but was then convinced by a find brought by Oskar Rom, a carved piece of wood. Two days later, Gabriel Gustafson visited the site himself for the first time and had the first provisional excavations carried out. Since the year was already too far advanced for a complete excavation, he had the excavation filled up and used the winter time to organize the excavation and to collect funds for it. 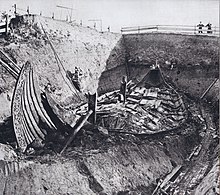 The half-excavated Oseberg ship at the site.

The approx. 22 m long and 5 m wide nave in typical clinker construction made of oak is so splendidly decorated and carved in the Oseberg style on the bow and stern that it is mistaken for a royal yacht or a ceremonial ship. Although seaworthy, it was probably only useful for trips near the coast. Dendrochronology analysis showed that the ship was built from oak trees felled in 820 and that the burial chamber dates from 834.

The height from the lower edge of the keel to the midship edge is only 1.60 m, the draft 0.75 m, the freeboard 0.85 m. The ship is made entirely of oak and is similar in construction to the other known ships from this time, but is less built and was not suitable for higher loads. The oar holes could not be closed while sailing. The mast is only weakly supported. The keel pig is disproportionately short. The mast bracket above is also too weak, it was cracked and was held together again with two iron straps. The floorboards are fixed except for those on the mast, so that the space below cannot be used. All of this suggests that this ship was not intended for long journeys where you had to take food with you. The mast was 9 to 10 meters high. With a sail area of ​​around 90 m², speeds of up to ten knots could be achieved. The ship had 15 pairs of oar openings , so that at least 30 rowers were necessary. The items of equipment found included a wide rudder, an iron anchor, a gangplank and a bucket.

The ship had been in use for several years, but had not been used for a long time before it was brought into the burial mound in 834. Many straps and the mast were hastily rebuilt for the purpose of the burial and in some cases were not even finished. So you must have already been missing, which is excluded until the end if the ship is in constant use.

The ship was reconstructed and is with those found in and with him objects in the Viking Museum of Oslo to see which also extending Tune ship and the Gokstad ship are.

The skeletons of two women were found in the burial chamber , one of whom was around 60 to 70 years old when she died and the other 25 to 30 years old. The grave goods included imported silks from the eastern Mediterranean and textile work . From the richness of the grave goods and the effort that was apparently put into the funeral, it can be seen that it was the grave of a very important person. Although it was initially assumed that the older woman was Queen Åsa of the Ynglinger family , mother Halfdan the Black and grandmother of Harald "Fairhair" , this assumption has since been deviated from. Instead, it is more likely today that it was a high priestess. According to DNA analyzes, Per Holck from the anthropological department of the Anatomical Institute at the University of Oslo is of the opinion that the ancestors of the younger woman came from the Black Sea region. Since the bones had already been returned to the burial mound in 1947, Holck was only able to work with DNA samples that had been secured at the time.

Whether the grave was broken into before it was rediscovered is disputed. No precious metals were found. Nevertheless, the yield of objects of daily use and of jewelry and works of art that came to light in 1904–1905 was extremely rich. These included four ornate sleds, a four-wheeled wagon with ornate carvings (the only find a wagon from the Viking Age to date), bed posts and wooden chests, as well as agricultural and household appliances. Among the textiles found were woolen clothing, silk and narrow tapestries. The fact that e.g. B. the bed was smashed, speaks against a grave robbery, in the context of which destruction would be pointless. One theory assumes that the destruction was directed against the habitability of the burial mound by the dead as revenant. The discovery of a 107-centimeter-long wooden trumpet , which, like the alphorn, was made from two half-shells, is significant for instrumental purposes.

The old restorations now lead to conservation problems and a dispute over the financing of the necessary security measures.