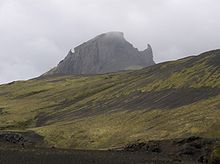 Palagonite ridge Einhyrningur in South Iceland
Palagonite in the microscope 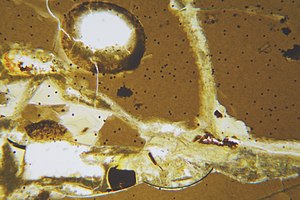 Palagonite (thin section, LPL): The rock glass is transformed into other minerals from cracks and bubble spaces (Kerlingarfjöll, Iceland)

Palagonite (thin section, XPL): In addition to the transformation products in crevices and bubble spaces, the glass itself is also partly Converted and then weakly birefringent

Palagonite is a completely devitrified , yellowish-brown, former rock glass that was created from basaltic lava . It is named after the place Palagonia in Sicily and forms an important part of the palagonite tuff.

Palagonite is formed by the process of palagonitization, especially in the hyaloclastite rock , which is formed when a hydromagmatic (subaquatic or subglacial) eruption of basaltic lavas occurs. As a result of the sudden cooling, the lava solidifies glassy, ​​i.e. without crystallizing, whereby the glass is easily and intensely fragmented and - together with rock fragments and slag fragments - is deposited around the eruption site. Through alteration under the influence of water, clay minerals , zeolites and iron hydroxides are formed from the glass , which cement the particles and give the rock strength. These mineral phases cannot be recognized macroscopically, but their formation causes the material to lose its original glass luster and become matt. In addition, the divalent iron is oxidized , so that the proportion of trivalent iron increases and the rock color of the resulting palagonite tuff turns brown. The transformation of the glass is exothermic , and the reaction produces enough heat of its own to keep the transformation going and to complete it in a short time, as one could study in the young palagonite tuffs on the island of Surtsey .

Also pyroklastit ical deposits of basaltic composition (basaltic tuffs and lapilli ) of Palagonitisierung may be subject, if they have an appropriate amount of glass.

The transition from the (pyroclastic or hyaloclastic) original rock to the palagonite tuff is fluid, so an exact delimitation is not always possible. The distinction between palagonite tufa and bentonite is also blurred, as the latter is essentially defined by its clay mineral content, so that overlaps are possible.

Originally it was assumed that palagonite only arises from eruptions under ice cover; however, this has now been refuted.

In the Rhenish Slate Mountains , occurrences of palagonite tuff are known, especially from the Eifel , where these have emerged from pyroclastic rocks (tuffs). On the right bank of the Rhine there is a small-scale occurrence of hyaloclastitic ancestry ( Beselicher palagonite tuff).

Locally as a brick. Between the towns of Pelm and Essingen there are deposits of palagonite on the Gyppenberg, which was used to make oven bricks . Palagonit " has a high degree of readiness for ion exchange and is therefore used to manufacture water filters ".