The Parc de la Villette is the largest park and the second largest green area of Paris . It is located in the 19th arrondissement and is crossed by the Canal de l'Ourcq .

The 35 hectare facility designed  by architect Bernard Tschumi was opened in 1983.

Until 1974 there were large slaughterhouses ( abattoirs de la Villette ) from the 19th century, which were modernized at great expense from 1963 to 1969, but then closed as a bad plan. 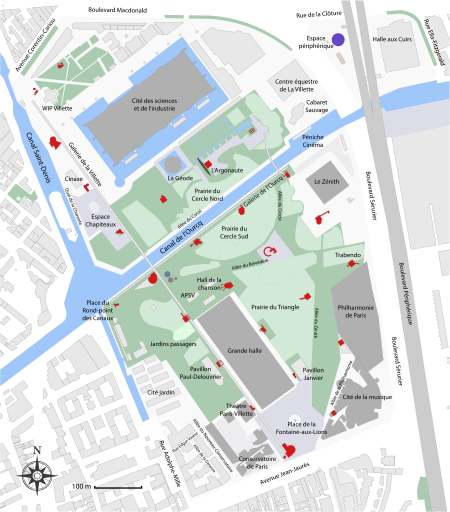 Bernhard Tschumi was based on the futuristic design of the Zénith, which opened on the site in 1984 . The elements of the park are early examples of deconstructivist architecture .

Its conception is based on three spatial levels:

Buildings in the park

In the 1980s and 90s, several major projects were successively implemented.

Other attractions in the park include the Le Cabaret Sauvage concert and circus tent and the Argonaute submarine , both north of the canal.

Some older buildings of the former slaughterhouses have been preserved. This includes:

The old cattle exchange ( pavillon de la bourse ) is used as a theater. The administrative offices ( Cité administrative ) are now located in the former buildings of the post office and the police post on the south-western edge of the park . However, the Hippodrome de Paris , which was located on the area between today's Zénith and the Cité de la musique , was not preserved.