Pegasus - The YoungStar rollercoaster in the Greek themed area of Europa-Park in Rust is a family rollercoaster from the manufacturer Mack Rides , which opened on May 25, 2006. 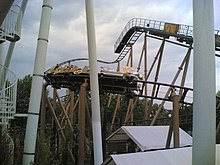 Pegasus - The Youngstar roller coaster is the manufacturer's first YoungStar Coaster . It is characterized by special single brackets and seat shells, which means that children from four years of age and a minimum height of one meter are allowed to ride.

Friction wheels are used on the 13-meter-high lift hill, and the trains are braked with eddy current and block brakes . As a special feature, the same blade is used under the car for both the friction wheel drive and the two types of brakes.

The railway has two trains with 18 seats each (one car with two and four cars with four seats each). The first carriage is designed after the eponymous winged horse Pegasus from Greek mythology. The other wagons are reminiscent of antique chariots.

The layout was calculated by the engineering office Stengel GmbH.