The Eurosat was a dark rollercoaster in Europa-Park in Rust .

The track opened on August 5th, 1989, making it the park's oldest “typical” roller coaster. All rail systems are located in a 45 meter high silver geodesic dome - the largest in Germany. It consists of 1,504 triangles and was built by the Mero company from Würzburg. It can be seen from afar and is one of the park's landmarks.

Just like the Euro-Mir , the Eurosat was made by Mack's own ride manufacturer. The travel speed was around 60 km / h, the travel time (including ascent) 3:20 minutes. With a transport capacity of around 1,600 people per hour, the train had one of the highest capacities in the park, which also meant that waiting times were shorter. When the train was originally planned, one more helix was planned, but this had to be abandoned due to the feared intensity of the train. A model in the Historama of the Europapark shows the interior of the Eurosat with this planned helix and separate entrance and exit.

Eurosat had seven trains with eight cars each. Two people could sit next to each other in each car. A maximum of six trains were used in real operation, as it was not possible under real conditions to load and unload the trains without delay. With seven trains on the line, there was a risk that a backlog of more than one train would form behind the station, which would ultimately have led to an emergency stop in the block brakes. For this reason, the seventh train was deliberately not used and still achieved a capacity of more than 18,000 passengers a day on peak days.

The Eurosat was in the French themed area of ​​the park and, like the Euro-Mir , dealt with the subject of space . The entire system was reminiscent of real space travel as well as adventures from science fiction .

The dome was redecorated for certain celebrations, for example it was transformed into a pumpkin with orange strips of fabric on Halloween , with a bow on Christmas and on the park's 30th, 35th and 40th anniversaries and for the 2006 World Cup , Eurosat became the world's largest Soccer ball .

In addition, a sign reading Pumpkin Coaster was placed in the entrance area during the Halloween weeks to complete the redesign. 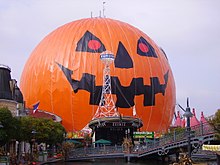 Eurosat as a pumpkin coaster for Halloween

The Eurosat soundtrack originally consisted of an orchestral theme. On December 2nd, 2013 the park released the original soundtrack on the CD Dreams of Music Classics - Historic Soundtracks from Europa-Park. The CD includes the original track Moebius Strip , which ran in the elevator of the train.

However, since 2000, the track used a new track from the Stark Fader group . The title of the piece is In a Second Orbit and it could be bought on CD in the Eurosat shop. In the elevator of the train the piece was split up, so that in the lower part only the strings (mainly synthesizer pads or surfaces), in the middle part only the beats, and in the upper part only the lead synth could be heard. At the end of the elevator a countdown was played, which ended at zero exactly when the first car of the train left the drum elevator. The exact text read: “Ten, nine, ignition sequence starts, six, five, four, three, two, one, zero. All Engines running! ”And was therefore identical to the corresponding excerpt from the countdown of the Apollo 11 mission.

In the queue was the track Transorbital , which was a remix of In a Second Orbit . The countdown was changed to match the respective "cladding" of the railway. For example, a goal celebration ran for the 2006 World Cup. In the winter season, the music was replaced by the track Santa's in the Orbit , a version of In a Second Orbit adapted to the winter season . The countdown was: “This is Santa Claus speaking! Ho ho ho! That's crazy ... saddle the reindeer! Yeah! All engines running! Merry Christmas!". Annually on Halloween not only the countdown was changed, but the music was completely replaced. The song He's Been Waiting for the Storm , also composed by the group Stark Fader, replaced In a second Orbit during this time . The countdown at the end of the lift was at this time: “Ha hahaha hahahaha ha! Ten, nine, time to crash! Two, one, zero! Hahaha ha! ".

Conversion to the Eurosat CanCan Coaster

Eurosat was closed to visitors on November 5, 2017 and completely renewed. The track material was completely replaced, the layout of the track was to be changed only slightly in memory of the Europa-Park co-founder Franz Mack and adapted to the current safety requirements. However, the old supports were retained. At the end of May 2018, the large dome was closed again after it was opened for rail replacement after the end of the 2017 summer season.

The entrance area of ​​Eurosat was adapted to the architecture of the French themed area and thus better integrated into the themed area. This includes a replica of the red mill of the Paris Moulin Rouge . The reopening took place on September 13, 2018, and Eurosat has been called Eurosat - CanCan Coaster since then .

In addition to the entrance for the normal queue, another entrance for a VR attraction was built. The train is driven from the VR station onto the route using a rotating rail. This VR attraction is named Valerian , named after the film Luc Bessons. The generic term for this project is the name Coastiality .

The soundtrack Eurosat CanCan Coaster for the new opening in 2018 was composed and produced by Eric Babak .