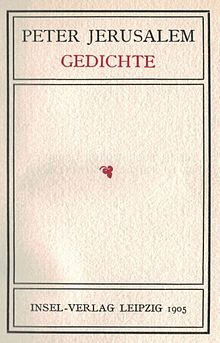 Peter Benedix (born July 19, 1877 in Kassel as Peter Jerusalem ; † March 6, 1954 in Irschenhausen ) was a German writer and archivist . Benedix is ​​considered to be the discoverer of the writer Lena Christ , with whom he was married from 1912 until her suicide in 1920.

Peter Jerusalem was born in 1877 as the son of Ernst Traugott Jerusalem and his wife Alida von Safft (1844–1920) in Kassel. He fled home at the age of ten and wanted to become a tightrope walker and then an actor. After an apprenticeship in a women's coats shop, he made the decision to become a painter, finally began to study medicine and in 1901 moved with his mother and two brothers to Munich to study philosophy. This was followed by trips to Denmark, Sweden, Switzerland and Italy. Thereupon he hired himself for a short time as a village school teacher in the Odenwald, but soon returned to Munich.

In 1910 he got to know Lena Christ through an advertisement , who was then employed by him as a dictation writer. After telling Jerusalem about her life so far, he convinced her to write down her personal experiences. He also introduced Christ to the works of the authors Gottfried Keller and Jeremias Gotthelf .

The couple married on August 28, 1912. In September 1915, Peter Jerusalem was drafted into military service. After the end of the First World War , his wife separated from him. After Christ committed suicide with his support in 1920 , he took over the care of their two daughters from their first marriage. Jerusalem also administered Christ's estate and published numerous poems, short stories, novels and various writings about his wife.

Four years after Lena Christ's death, Jerusalem married the music teacher Sascha Kraus. In 1933 he changed his name to Peter Benedix under pressure from the Nazi regime. He died on March 6, 1954 in Irschenhausen. His widow committed suicide shortly afterwards.