The phrenology (from ancient Greek φρήν phrēn , genitive φρενός phrenós "spirit, mind, diaphragm, core, soul", and λόγος lógos "doctrine") is a at the beginning of the 19th century from that of the physician and anatomist Franz Joseph Gall (1758 –1828) formulated localization theory or skull theory developed topologically oriented teaching that attempted to assign mental properties and states to specific, clearly delimited brain areas . A connection between skull and brain shape on the one hand and character and intellectual gifts on the other hand was assumed. An alternative to phrenology was the equipotential theory . It was named phrenology from 1815 on the suggestion of the English naturalist Thomas Forster .

Phrenology (as "theory of the soul") is to be distinguished from the craniology (craniology) influenced by it and its pioneer Gall and from craniometry ("theory of skull measurement") as a tool of racial studies . This teaching became especially popular in the early 20th century , especially in connection with racist theories . Craniometric measurements were still widespread in anthropology and ethnology , today they are still used in archeology , in addition to the measurement of animal skull bones , in order to gain knowledge about the evolution of the human species. 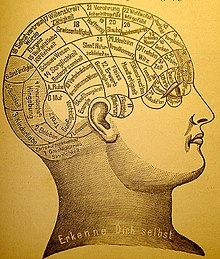 Presentation of character traits and skills

According to Gall's conception, the brain was the real seat of all human mental activity. The character and the mind and ultimately also the intelligence resulted for him from the interplay of the various degrees of existing intellectual abilities. These were for him to a number of "organs", i. H. materially existing parts of the brain bound, with each organ being the seat of a characteristic intellectual gift or an impulse . The size and shape of the individual organs was therefore a measure of the development of the respective character trait, the overall character disposition of a person was predetermined in the proportions of the organs to one another. Clues for the development of the organs can be obtained (on the living object) from the external shape of the skull. Gall himself also showed interest in the overwriting of the mortal remains in the intellectual field of active contemporaries and hoped to gain new knowledge from the investigation of the skulls of domestic animals (whose former peculiarities should be communicated to him). 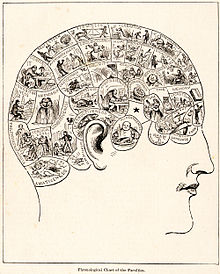 In Gall's original version, about which he speculated for the first time in 1791, there were 27 different "organs" that are outwardly represented as fields (expansions visible to the eye). Gall's student Johann Spurzheim (1776–1832) later added his own extensions to the model and made it known on several trips to France, Great Britain and the USA, among others. In these countries the doctrine quickly found further followers who made their own decorations (in particular the number of organs continued to grow over time).

In 1820 the "Edinburgh Phrenological Society" was founded in Scotland, which from 1823 published its own magazine. Its founders included George Combe and his younger brother Andrew Combe , who published numerous writings on the subject. Lorenzo Niles Fowler and Orson Squire Fowler were among the representatives of the theory in the USA , the former later went to England and founded the "British Phrenological Society" there in 1887, which existed until 1967. 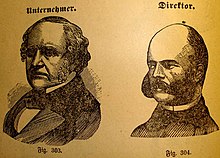 A practicing phrenologist said at the time that he was able to determine the talents and abilities of a child from the age of six. The diagnosis made was often used for choosing a career. The ability of the phrenologist to predict future behavior and thus the future based on “scientifically” justifiable theories must have exerted a great fascination on his contemporaries. Of course, it posed little problem for them to incorporate a whole number of observations on the subject's environment into their assessments without calling the theory into question.

The older of the Combe brothers also applied the theory to the assessment of offenders and inmates of psychiatric institutions and developed ideas for improving the lot of the disadvantaged classes through education and character development.

The main period of diffusion of the teaching was in the years up to 1860; after that it was still practiced, but had become obsolete as a research object. The scientific value of Gall's theory has always been controversial due to its virtually non-existent empirical justification. However, this did not detract from their popularity, anthropological and natural philosophical works in which reference was made to them were among the most widely read writings of the time.

In the late 19th century, the French anthropologist Paul Broca and the German neurologist Carl Wernicke were able to identify regions of the brain that are of great importance in language production and understanding. This confirmed a not insignificant part of Gall's theory (the functional differentiation of the brain) in principle and thus found its way into modern neurosciences. In fact, the regions of the linguistic sense postulated by Gall were even in the vicinity of today's experimentally confirmed Brodmann areas . However, this is probably due to coincidence - most of the “organs” proposed by Gall are out of the question as independent brain regions. The phrenology of Franz Josef Gall can be understood as the forerunner of today's brain localization theory (Brodmann areas). To quote from textbook sources:

“The first person to be convinced that mental and spiritual functions could be localized in the brain was the doctor and anatomist Franz Josef Gall in 1769. With the knowledge that the individual turns of the brain are not equivalent to each other, he can be considered the founder of modern localization theory "

In this context of contemporary history, the name of the Swiss pastor Johann Caspar Lavater (1741–1801) should also be mentioned with his four-volume Physiognomic Fragments (1775–1778), in which Goethe participated. The physiognomy of Lavater is, today. T. in expression psychology.

Phrenology found expression in the works of the Italian criminologist Cesare Lombroso (1835–1909), in which he traced criminal tendencies back to hereditary predisposition and described methods for their detection on the basis of physical "defects". The Belgian pedagogue Paul Bouts saw in phrenology a means to improve the learning success, since it should enable a response to the special character traits of the students.

Phrenology can be seen as an example of the fact that, in the history of medicine, knowledge of anatomical conditions has contributed to a slowly growing progress in the formation of physiological theories. Max Neuburger presented this development in medicine as wave movements in the sense of mutual progress in knowledge between the view based on purely anatomical localization and a physiological way of thinking in the sense of a "general functional pathology ". 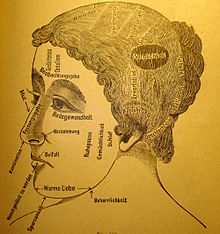 The brains of famous greats in history, such as B. that of Einstein or Lenin , u. a. as a result of this teaching still preserved today.

“In every human brain there are thirty-three organs and properties, distinct in kind, different in size, but natural, even, marked and constant. They are big in some heads, small in others, but all have and have all. They work differently, individually and together. And therefore there are different characters. "