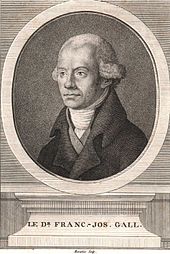 From 1777 Gall studied medicine first in Strasbourg , then from 1781 under the empiricist Maximilian Stoll in Vienna , where he completed his studies, received his doctorate in 1785 and stayed until 1805. After lecture tours through Europe, he settled in Paris as a general practitioner in 1809 . With phrenology (Gall's skull theory) he founded the doctrine in the following years that the brain is the center for all mental functions. He also contributed significantly to physiognomy . This teaching shows how personal character traits or characteristics on the face can be read through facial expressions . He also discovered the fiber structure of the brain. In addition, with his cranioscopy he worked out the craniometry (skull measurement), through which Gall hoped to draw conclusions about the shape of the brain. However, he failed with this theory due to three causes:

For his brain anatomical and cranioscopic examinations, Gall collected a large number of skulls in Vienna, "mostly of madmen or criminals" , as well as many plaster busts made from nature of well-known people or of people "with special skull formations" .

In 1801, Emperor Franz II instructed one of his ministers to immediately stop the private lectures held by Gall in his apartment, which " seemed to go against the principles of morality and religion " . Gall was expelled from Austria in 1805 and set out on a European tour that took him via Munich to Augsburg and Frankfurt am Main . In 1808 he reached Paris , where he tried to further spread his teaching:

“As recently as Dr. Gall visited the local fool's house, Bisetre , was accompanied by a madman, with whom he could not find any signs of madness, neither in his speeches nor on his skull. He told him. The madman replied: Don't be surprised that you find no signs of madness on the head that is now sitting on my shoulders. It's a strange head that was put on me after mine was guillotined during the revolution . "

After the initial enthusiasm of the male and female public, this gradually turned into public contempt for his new teaching theory, with which he divided the world of science at the time:

“Today's Journal de l'Empire contains a long article against the Dr. Gall, which means among other things: His science is no longer profitable here; every evening the hall is nicely lit, but the benches are empty; the few listeners he still has open their ears, but not their bags. The price for the lectures has already been lowered a lot, it is likely that they will soon be available for free, etc. "

This hype nevertheless drew many desires for the skulls of important personalities: a number of graves were looted - the skulls of z. B. Joseph Haydn , Betty Roose and René Descartes , or individual parts such as the skull plate by the composer Gaetano Donizetti . After Gall had attracted the attention of the regent Napoleon Bonaparte in France , he retired to his country estate in Montrouge near Paris around 1820, where he ordained as a practitioner until the end of his life . Elements of Gall's phrenology were also incorporated into the "Positive School of Criminology " developed by Cesare Lombroso in the second half of the 19th century.

When Gall left for Paris, his skull and bust collection remained in Vienna. In 1824 Gall wrote to his friend Anton Rollett in Baden near Vienna and in this way left him the now famous collection for his museum , into which his own skull was "incorporated" after his death.

There are two portrait medals by Gall: