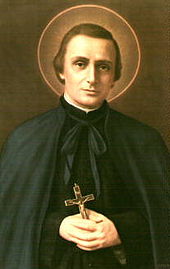 Pierre Chanel studied theology at the seminary in Brou , was ordained a priest in 1827 and was then vicar in Ambérieu and pastor in Crozet . In 1831 he joined the still young community of the Marist Fathers and became a teacher in Belley. In 1836, at the age of 34, he traveled to Futuna as a missionary with Bishop Pompallier in the South Seas . In 1835 Pope Gregory XVI. created the Apostolic Vicariates of Western and Eastern Oceania and thus initiated the Christian missionary work in Oceania .

Pierre Chanel's work was crowned with little success. However, when the chief's son wanted to be baptized, chief Niuliki saw his authority at risk and charged his son-in-law Musumusu with the murder of Chanel. Pierre Chanel was slain. When the vicar general of the missions wanted to recover the body a year later, numerous locals asked for the baptism. Only a few years later, the entire population was baptized. To date, 98% of the population is Roman Catholic.

Pierre Chanel is now the patron saint of Oceania, and the Saint Pierre Chanel basilica was built on the site of his death . He was on November 16, 1889 by Pope Leo XIII. beatified . His canonization by Pope Pius XII. took place on June 13, 1954.

His feast day is April 28th. The church of his birthplace Cuet is a destination for pilgrimages .