This article deals with the body to be tested or the body used for testing in terms of materials testing and measurement technology. For test mass or test charge in terms of physics, see force field . 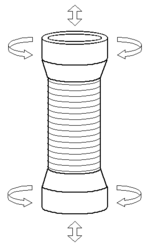 " Segerkegel " for determining the fire resistance

In materials testing , specimens are objects made from the material to be tested with precisely defined properties such as shape, size or material composition. They are exposed to defined mechanical, thermal or chemical loads in special test devices (e.g. the universal testing machine ) in order to determine the material properties and certain material parameters.

Test specimens with precisely defined measurable properties ( measured values ) are used as reference objects for testing and adjusting medical X-ray diagnostic equipment. Such test specimens consist of material with defined radiation attenuation properties and they contain predefined imaging structures that are suitable for ensuring the image quality. In order to produce an X-ray image, the test body is positioned as an X-ray phantom in the X-ray diagnostic device instead of the patient . Based on its known object properties, the quality of the structures shown is determined in the X-ray image. 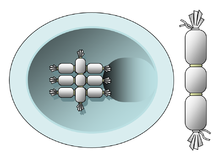 In the functional test of toilet flushes carried out in accordance with DIN 1385 and EN 997, artificially reproduced "fecal sausages" are used as test specimens as a substitute for real human faeces . These standard test bodies are not available for sale, but must be made by the tester himself from synthetic casing and other materials.