As Profile Church or topics Church designating diocese Limburg churches that serve a thematically narrowly defined purpose. Possible forms are the use as a youth church , center for Christian meditation and spirituality , cultural church , national church or as a pastoral care center for mourning .

The aim of the youth churches is to give young people, to whom the traditional forms of worship often seem alien, spaces in which they can shape community and worship with their music and their forms of youth culture . 180 youth churches have been established in Germany since 1995. 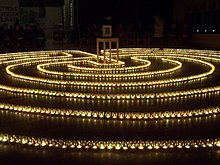 A profile church with the orientation as a meditation Church , for example, provides religious services , meditation classes , retreats, retreats , spiritual accompaniment conversations and other events, such as concerts at.

The center for Christian meditation and spirituality was founded in 2007 by the then Bishop Franz Kamphaus of the Limburg diocese . It is located in the former Heilig-Kreuz parish church in Frankfurt - Bornheim and was the first of its kind in Germany .

The aim of the work of a profile church with the orientation as a mourning church is a reconciled approach to farewell, dying and death on the basis of Christian hope for resurrection .

Profile churches of the Diocese of Limburg