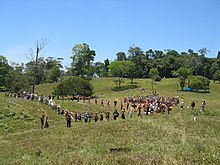 A Rainbow Gathering ( Engl. "Rainbow Gathering") is a meeting of the Rainbow Family ( "Rainbow Family"). Rainbow gatherings usually take place outdoors in a secluded environment. There are no official organizers, only so-called “scouts” who look for or select a suitable place and Focalizers who disseminate information on the location and preparation of the meeting. Due to the absence of any hierarchy , these meetings are an example of self-organization and anarchy . In the USA there have already been conflicts with local authorities, as they consider a “leader” to be inevitable at larger gatherings.

The first European Rainbow Gathering in Germany took place in 2005 in Thuringia.

In 2009 the 27th Gathering of the European Family took place in Ukraine and allowed many members of the Russian Rainbow Family to take part without any entry difficulties.

In 2011 the European Rainbow Family met in Portugal, 2012 in Slovakia and 2013 in the northern Greek mountains near the Albanian border.

In the summer of 2014, the European Gathering took place in Romania.

The Gathering of the Swiss Rainbow Family 2015 took place from August 14th to September 13th in the Valle Onsernone .

At the 33rd Europe Gathering 2015 in Lithuania it was decided to have the Gathering 2016 in the Alps. When scouting the search for a suitable place is called.

The European Gathering 2016 - from new moon on August 2, highlight Full Moon 17 (18) August and the end to new moon on September 1 - with participants from over 35 nations included about 450 participants, as she on August 2 in the Kaiserau settled . Without a clear or permanent consensus from the landlord, Stift Admont , they camped on this alpine pasture at 1200 m above sea level and violated Austrian law by camping and lighting a fire in the forest. The district authority ordered a police operation, 70 police officers enforced the withdrawal of the "particularly peaceful" participants on the afternoon of August 7, who then held a talking circle at the parking lot. One person was carried away by police. A voice from the ranks of the participants admitted that “at this year's organization of the gathering of Gathering participants from all over the world , 'not everything went very well' .” The participants left the place “understanding, if wistfully” and hope to an offer from people in Styria or Upper Austria to set up a camp. According to a participant, heard on the ORF television program "Steiermark Heute" on August 7th, the monastery had previously confirmed the availability of toilets, but then it was revoked. In the end it was possible to find a place on the Slovenian-Italian border and to realize the 34th European Gathering there in a somewhat improvised form.

In 2017, the European Rainbow Gathering took place in the northern Italian Alps. The extreme isolation - access was only allowed for several hours on foot over impassable terrain - was criticized because wheelchair users, for example, had no access.

In 2018 a meeting took place in August and September on the Hohen Geba in Thuringia.

The participants refer to themselves as Rainbows and their community as the Rainbow Family. They are of different national and social origins and often belong to diverse subcultures such as ecos , peace and environmental activists, self-sufficient people, travelers, hippies, dropouts and esotericists . You will find teachers, doctors, craftsmen, artists, students as well as fathers and mothers with children here. At larger meetings, people from the respective area also regularly appear, whose presence significantly shapes the atmosphere and culture of the meeting.

At a rainbow gathering, decisions are made according to the principle of consensus and a minimum of agreements determine the coexistence for several weeks: non- violence , no alcohol, no drugs, no trading in money and no electrical devices.

The last agreement reveals a certain technical criticism of many rainbows, which not infrequently also live the rest of the year in trailer settlements and municipalities or are on the road as "traveling people". The central element of a gathering is the circle. In the center of the camp of tents and tipis there is an open area around a large fireplace, where the participants come together twice a day to eat together (Food Circle) and for other activities.

Money for the common meal is collected in a daily collection in a circle with the Magic Hat . A changing group of participants takes care of the purchase and preparation of food. These are vegan , organic if possible and are bought from local farmers if possible. There is a separate kitchen for the children at the meeting, where they cook several times a day using dairy products.

Meals and groups of all kinds as well as important information are announced by phone. An agreement is to repeat these calls so that as many as possible are informed.

Many participants in a gathering offer free workshops that range from courses in didgeridoo and African drum dance to Shiatsu , Reiki and Tai-Chi to the construction of wind generators and non-violent conflict resolution.

The main European meetings usually take place around the second full moon after June 21 (the summer solstice ) in different countries. The decision for the location of the next gathering is made in the so-called Vision Council , a discussion group open to all, in which people often talk to each other for days until a country is finally selected for the next gathering based on the principle of consensus. In spring, scouting begins with the search for the right place, where the seed camp , the nucleus of the gathering, is often set up by a dozen dedicated people six weeks before the rainbow full moon .

Rainbow Gathering 2004 in the Rhodope Mountains

The rainbow symbolizes the different currents, colors and tribes of human culture. The origin myth of the rainbows is said to go back to a legend of the North American Hopi people , which says that a new tribe of people from all parts of the world will come together, whose colors are as different as those of the rainbow. After an era of exploitation and war it will be this tribe, so the legend goes, that reconciles man and nature and heals the earth. A Hopi-Elder interviewed by the American author Michael Niman, on the other hand, considers the connection between his people and the rainbow myth to be incorrect.

Foodcircle in the Rainbow Gathering Seed Camp in 2000 in Romania

The first Rainbow Gathering was first organized in the USA after the Vortex II Festival in 1972 and has been celebrated since then in different states and always on July 4th, the US national holiday. These annual gatherings can be quite large and attract up to 40,000 people. The annual large gatherings in Europe began in 1983 in a high valley in Switzerland. Compared to the US gatherings, they are relatively manageable with an average of 1,500 participants around the full moon festival; in Hungary there were an estimated 4,000 people during the total solar eclipse in 1999. Often groups of people come together at the meetings and organize smaller local rainbow gatherings or "walkabouts" (rainbow hikes) in the time between the large meetings.

The gatherings have been criticized by some Native American representatives because the gatherings are a cultural appropriation of their traditions.