This article should be edited. Details should be given on the talk page. Please help to improve it , and then remove this flag.

This item has been on the quality assurance side of the portal sociology entered. This is done in order to bring the quality of the articles on the subject of sociology to an acceptable level. Help eliminate the shortcomings in this article and participate in the discussion . ( Enter article )
Reason: At the moment, only the reception of the term by the critical whiteness movement is presented. There is therefore already a neutrality module. The problem with the article is deeper, especially since it was derived from a translation of the enWP article without importing the history. - Trinitrix ( discussion ) 14:34, Sep 18. 2017 (CEST)

Example of a Phoenician handicraft from the British Museum that uses Egyptian motifs for decorative purposes. The cartouche contains hieroglyphs in a meaningless order.

According to the French cultural philosopher Michel de Certeau, cultural appropriation is a “space for the powerless to act”. According to Certeau, actors find opportunities in everyday life to deviate from given patterns of action and to change their meaning in a possibly “subversive” way. The objects appropriated in this way could also be everyday objects, social institutions, knowledge systems or norms.

The discourse of the critical whiteness movement, on the other hand, focuses on specifically “cultural” objects. Examples include different genres of art (music, dance, etc.) or religious things (symbols, spirituality , ceremonies ), but also fashion and language styles , social behavior and other forms of cultural expression.

The propriety of cultural appropriation is the subject of lively debate. Opponents see it as a theft. It is particularly critical when the culture belongs to a minority that is socially, politically, economically or militarily disadvantaged, for example because of ethnic conflicts . The suppressed culture would then be torn out of its context by its historical oppressors.

Criticism of the concept

Proponents see some appropriation as inevitable or as an enrichment that occurs out of admiration and without malice. It is a contribution to diversity. Even in early history there were lively cultural transfers on the Silk Road . Without cultural appropriation, Central Europeans would not be able to sit on sofas or eat apple strudel , both of which have their origins in Asian cultures. The concept of cultural appropriation is more of an absurdity.

The literary scholar Anja Hertz sees in the uncompromising criticism of cultural appropriation the danger of seeing culture too much as something uniform and clearly limited; according to Hertz, the accusation of cultural appropriation implies “a reactionary idea of ​​cultural purity”. Marcus Latton wrote in Jungle World that the "real existing anti-racism " runs the risk of turning into its opposite, since among other things, any criticism of a culture is undifferentiated without legitimation. Such a re-essentialization of culture is analytically as well as politically problematic, writes sociologist Jens Kastner.

According to the social scientist Samuel Salzborn , the concept of cultural appropriation is based on the idea that there are “something like 'authentic' and thus collectively fixed elements of a sub- or minority culture [...] that should only be reserved for this culture”. This idea is "however entirely ahistorical". It amounts to a homogenization of social relationships and an ethnicization , that is, the incapacitation of the subject, because being able to decide for or against belonging to a group and its cultural identity is “the core of freedom, the generally must be directed against any culturalization ”.

On the occasion of a discussion on cultural appropriation at the Anne Frank educational institution , the gender researcher Patsy l 'Amour laLove criticized the concept as folkloric : foreign cultures are presented as particularly "pure" and "original" and thus ultimately led to an exoticization . In addition, parallel to character traits, it is not possible to link cultural practices with certain ethnic groups.

The cultural theorist George Lipsitz sees the calculated use of other forms of culture as a strategy with which a group defines itself. This occurs with both the majority and the minority, so it is not limited to one side. The majority culture should, however, take into account the socio-historical circumstances of the appropriated culture in order not to perpetuate the historically unequal power relations. According to this view, the resistance of cultural minorities against the majority society (e.g. in imitating and changing aspects of the majority culture) is excluded from the concept of cultural appropriation, because here the balance of power is reversed. A historical example is the emergence of mods in the UK in the late 1950s and early 1960s. Working-class youth in particular imitated and exaggerated the tailored clothing style of the upper middle class, using iconic British symbols such as the Union Jack and the Royal Air Force cockade . This recontextualization of cultural elements can also be viewed as cultural appropriation, but it usually has no negative connotations.

The historically most controversial cases took place in places where cultural exchange was highest, such as along the trade routes in Southwest Asia or Southeast Europe .

In the present, various pop singers and actors have been accused of illegitimate cultural appropriation:

Wearing a war bonnet is an example of cultural appropriation

Sports teams at US universities often use symbols of Indian tribes as mascots, which, according to critics, contradicts their educational mandate. As a result, the NCAA issued a guideline in 2005 that changed names and mascots, with the exception of indigenous educational institutions. According to the NCAI , two thirds of all names and mascots have been phased out in the past 50 years. Some Indian tribes, however, approve of mascots, such as that of the Seminoles, the use of their chief Osceola and his Appaloosa "Renegade" by the FSU football team . The General Assembly of the United Nations issued a statement against the appropriation of indigenous culture. In 2015, a group of indigenous scientists and authors published a statement against rainbow gatherings . 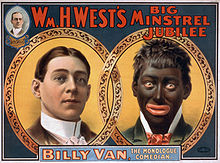 This reproduction of a poster by William H. West from around 1900 shows the transformation of a white actor to blackface.

Blackface is a masquerade of white performers to portray black people . It became popular in the 19th century and contributed to the spread of negative stereotypes, such as ethnophaulisms . In 1848, minstrel shows were popular with the general public. In the early 20th century, blackface was diverted from minstrel shows and became a genre of its own until the US civil rights movement of the 1960s.

The term wigger is slang for white people who imitate African American subculture, such as African American English and street fashion in the US and grime in the UK. The phenomenon appeared a few generations after the end of slavery in predominantly "white countries" such as the USA, Canada, Great Britain and Australia. An early form was the white negro in jazz and swing of the 1920s and 1930s. Norman Mailer explored this in his 1957 essay The White Negro . Zoot Suiters followed in the 1930s and 1940s, hipsters in the 1940s , beatnik in the 1950s and 1960s, blue-eyed soul in the 1970s and hip-hop in the 1980s and 1990s . Today, African American culture is spread and marketed worldwide.

In Australia, indigenous artists have discussed an “authentic brand” to educate consumers about inauthentic art.

This movement took off after 1999 when John O'Loughlin was convicted of fraud for selling art that was purportedly painted by indigenous artists.