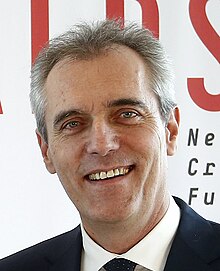 Rainer Seele was born the son of a steel construction company. After high school and military service, he studied chemistry at the Georg-August-Universität Göttingen from 1980 , where he received his doctorate in natural sciences in 1987 with a dissertation on the synthesis of biologically active acetal glycosides for selective tumor therapy .

He then worked at BASF in Ludwigshafen am Rhein , initially in chemical research, later he took over the management of the research planning and controlling unit. In 1996 he moved to the BASF subsidiary Wintershall in Kassel as Head of Strategic Planning , and in 2000 he took over the management and sales management of the then Wintershall subsidiary Wingas . In this function, from 2002 onwards, he primarily made public the importance of Russian cooperation for gas supply in Europe. In 2002, Seele also became a member of the board of directors at Wintershall as the person responsible for natural gas trading, and he served as its chairman from October 2009 to June 2015.

Since March 2012 he has been President of the German-Russian Chamber of Commerce . Since July 1, 2015, he has succeeded Gerhard Roiss as CEO of OMV . In May 2017, his contract, which was initially concluded for a period of three years, was extended by two more years to June 30, 2020. In September 2019, he was reappointed by the Supervisory Board of OMV Aktiengesellschaft as Chairman of the Management Board and CEO of OMV, the term of office was extended by two years to June 30, 2022, with an extension option for a further year.

He came under fire in the course of both the climate debate and the corona crisis. With an income of up to seven million euros in 2019, while OMV is pursuing austerity measures through the crisis, he is considered the best-paid manager in Austria.

Rainer Seele is married and has three grown children.