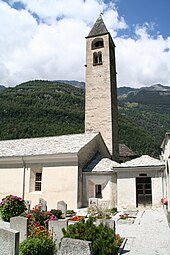 The Reformed Church of S. Martino (for "Saint Martin", under the Italian patronage of St. Martin ) in Bondo in Bergell is an Evangelical - Reformed church under the monument of the canton of Grisons .

The building, designed as a hall church with a long semicircular apse , was inaugurated as a uniform Romanesque building on January 30, 1250 by Bishop Volkard von Neuburg . The strikingly high tower with a tent roof was added in the pre-Reformation period at the end of the 15th century. The top floor was probably added later.

In 1617, during the turmoil in Graubünden , the interior of the church was redesigned. The wooden coffered ceiling was replaced by a barrel vault supported on pilasters. In addition, the windows were modified and the rose window was inserted into the main facade. In 1687 the sacristy was built next to the tower.

after the renovation,
July 2011

Extensive restoration work is currently (summer 2010) in progress; Above all, the masonry should be dehumidified. During the work, a previously unknown floor made of stone slabs came to light under the wooden floor. The roof has already been re-covered.

In front of the choir is a communion table made of yellow and red marble from 1760, which is very similar to that from the Reformed Church of S. Trinità in Vicosoprano . The organ is more recent and was installed in 1972. In the floor under the pulpit there are grave slabs from the 16th and 17th centuries. Century.

During the renovation in 1960, murals in the nave and choir in the style of the early Renaissance from the period 1480/90 were discovered and restored by Lombard artists. Among other things, there are motifs related to Christophorus , Martin von Tours and Johannes . The motifs, ornaments and painting style shown show that the pictures come from the same painter who painted the Reformed Church in Bergün .

The Last Supper depicted on the south wall is interrupted by a pillar inserted in 1617. In the mandorla , Christ is depicted as Pantocrator , surrounded by the evangelist symbols, which are designed as human figures with the heads of their symbols.

Bondo formed a pastoral community with the other Bergell parishes until the end of 2010 . Since 2011, the whole of Bergell has been merged into one parish . The Evangelical Reformed Regional Church of Graubünden conducts this within the Colloquium VII Engiadin'Ota-Bregaglia-Poschiavo-Sursès .