The reserve manual procedure (abbreviation: RHV or RHV ) was a manual key procedure used by the German Navy . It was used by naval units, for example smaller ships, that did not have a machine key ( Enigma-M3 or Enigma-M4 ). In addition to this “reserve hand procedure, general” there was also the “reserve hand procedure officer”, which was used as a replacement and emergency key in the event that the Enigma, for example a submarine, failed due to feared exposure, loss or defect. On islands in the Aegean Sea , land units of the Kriegsmarine use a variant form called the Henno key .

The reserve manual procedure consisted of two cryptographic stages ( transposition and substitution ) and required several (at that time) secret partial keys , of which there were many different issues (such as No. 1, No. 2 etc.). These were:

The first level of encryption was a column transposition . For this purpose, the plain text was filled in beforehand with filler letters so that its length was an integral multiple of four. Then it was entered line by line in a so-called "box cube" and then read out column by column in an irregular order using a "series of numbers" given as a partial key, which was taken from the table of numbers. For example, with 15 columns in the order 12, 8, 6, 14, 3, 1, 9, 13, 4, 15, 7, 10, 2, 5 and 11. The intermediate text thus obtained was grouped in text pieces of length four, the “Book groups” that were written one below the other on the key label. So you got a transposed text in four columns and many lines.

The second level of encryption was a monoalphabetic bigraphic bipartite substitution. For this purpose, two vertically one below the other from two neighboring book groups were interpreted as a bigram , which was replaced by a secret bigram with the help of double-letter exchange tables from the key booklet . A different table was used for each of the four columns. The current exchange tables were read from the exchange table, a table that represented the last partial key.

The result was the “radio groups”, which were usually transmitted by radio in Morse code as groups of four . The authorized recipient of the secret message could decrypt it and read the original plain text using the key known to him and reversing the procedural steps.

British codebreakers in Bletchley Park around Jack Plumb , such as ASC Ross , CT Carr , Bentley Bridgewater and James Hogarth , succeeded from June 1941 - initially with the help of key documents captured from U 110 (see also: U-boat war ), later also cryptanalytically  - Breaking RHV radio messages . Although the intelligence value of the deciphered texts was often disappointingly low for the British, they used them as cribs in deciphering Enigma radio messages . 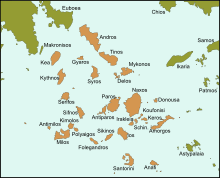 Map of the Cyclades

From May 1943 onwards, the British observed the use of a procedure similar to the RHV in the Mediterranean theater of war , which the Germans called the Henno key . It could not be broken and work on it was stopped.

In April 1944 the British armed forces launched raids on the Cyclades islands of Santorin , Ios , Amorgos and Mykonos, which were occupied by the Wehrmacht . The purpose was to eliminate the German observation posts there. The British fell into the hands of all secret documents on Henno on Mykonos, which the Germans did not hide. They then gradually changed all key documents.

The step-by-step change to the key tables that was carried out in this way turned out to be a fatal cryptographic error, because the British Codebreakers managed to keep up with the German modifications. If, on the other hand, the Germans had suddenly changed all the documents at the same time, the break-in would probably have been prevented. In this way, however, the British were able to "read" more than a thousand Henno radio messages month after month with a staff of up to 30 code breakers. The news value of these decipherments was mostly disappointing for the British, so that at the end of August 1944 they decided to stop working on Henno.