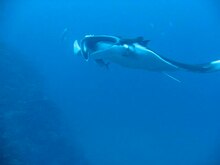 Manta rays , clearly visible the gill trap
( cleaner wrasse in the front of the mouth)

The giant manta ray ( Mobula birostris , Syn .: Manta birostris ) is a species of ray from the family of devil rays . “Manta” is Spanish and means “ceiling”. The head fins finally brought the animals the name "devil rays".

Giant mantas can reach a span of seven meters and a weight of two tons. In contrast to many other types of rays, they do not have a poison sting. In contrast to their relatives, they usually stay near the surface of the water where they can find their food. Apparently they only spend their rest periods near the ground. Mantas have a head fin on either side of the head. With these fins, they add extra plankton-rich water to their mouths. For a long time it was believed that they only feed on plankton , which they catch while swimming. However, isotope studies of the muscle meat of giant manta rays showed that the giant manta rays also had to eat other foods. Almost 75% of their diet is likely made up of fish and pelagic molluscs . These are likely to be hunted at depths of 200 to 1000 meters.

Like the cow-nosed rays , the giant manta ray uses its fins in a similar way to bird wings. The top speed is 9–12 km / h. Sometimes they jump out of the water. Jumps over 2 meters have already been measured in smaller devil rays.

Giant mantas are distributed worldwide in all tropical oceans in shallow water. They prefer waters near the coast.

Mantas can be found both in the fringes of the Indian Ocean and on the fringes of the Atlantic and Pacific as well as in the adjacent seas such as the Gulf of Mexico. In the western Atlantic, the distribution area extends from the Gulf of Mexico to tropical Brazil. In the Indian Ocean, the distribution extends from South Africa to India. The western Pacific is populated from northern Australia to Southeast Asia and in the area of ​​the oceanic islands. The giant mantas are also at home in the adjoining seas such as the Bay of Bengal, the Red Sea and the Arabian Sea. Mantas can often be found at the cleaning stations in the reefs and are usually accompanied by ship keeper fish.

Mantas are listed on the IUCN red list in the "NT" category. They are not yet considered to be threatened with extinction, but their populations are very sensitive due to the low rate of reproduction.

The giant manta ray is sexually mature when it is five years old. When mating, the male introduces one of his so-called clasps into the cloaca in the female . It takes 13 months for the boy, about 1.9 m wide and 10 kg, to be born. Emergency births in harpooned pregnant females have been observed several times. In June 2007 the first giant manta ray was born in captivity at the Okinawa Churaumi Aquarium . The female, 1.9 m wide, however, died just five days after its birth - it may have been harassed and injured by its father.

In addition to humans, who only fish for mantas to a limited extent worldwide, predatory sharks , including tiger sharks , are among the larger enemies of this species. Humans hunt the devil rays by harpooning. Their meat is considered a local specialty, their liver is rich in oil, and their skin is made into abrasives. Other animals fall victim to drift nets and gillnets. Gradually the hunt for the manta is also gaining commercial interest. 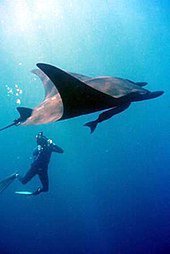 The type of movement, appearance and size of the manta rays as well as the name "devil rays" probably contributed to the fact that all kinds of horror tales circulated about them among seafarers in the 18th and 19th centuries. It was therefore previously wrongly believed that giant mantas were dangerous for humans. Most animals even tolerate divers by their side. In March 2013, the CITES Species Conservation Conference in Bangkok decided to regulate the trade in manta rays; the regulation came into force on September 14, 2014.

Giant Mantas are currently only kept in four zoo aquariums around the world, including the Georgia Aquarium and the Okinawa Churaumi Aquarium . In the latter, a baby manta ray was even born in 2007, but died a few days later due to an injury to the pelvic disk. "Animal rights activists blamed the keeping conditions in marine zoos for this".

The manta ray was the inspiration for the name of the General Motors Opel Manta automobile model , produced from 1970–1988.