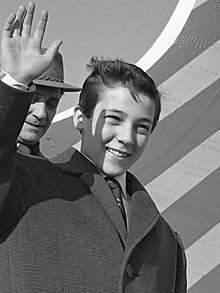 Roberto Loreti (born October 22, 1946 in Rome ), better known by his stage name Robertino, is an Italian singer , actor and child star who became known for his recordings in boy soprano in the late 1950s and early 1960s .

The son of a baker sang in the local bakery shop as a toddler, where he quickly became known locally. When he was six, he starred alongside Gino Cervi and Fernandel in Don Camillo's Return , the second part of the Don Camillo film series.

In 1960, the Danish television director Volmer Sørensen , who was on vacation with his wife in Italy , heard him in a tourist café where Robertino often appeared and invited him to Copenhagen . Accompanied by his father, Robertino went there immediately and had his first appearance on Danish television a little later. This was an immediate success, but Robertino still had to wear shorts here at the age of thirteen to emphasize his childlike nature.

Soon he was known throughout Europe and sang, accompanied by the Otto Francker Orchestra , arias and well-known pieces such as Santa Lucia , O sole mio , Ave Maria, La Paloma and Brahms' lullaby . He also played in various films. Robertino sang the title Mamma from 1938, which made Heintje a child star in Germany in 1968, in the original Italian text in 1961 in the German hit film Im schwarzen Rößl . At the side of Bobby Rydell Robertino also went into the race with the song Un bacio piccolissimo at the Sanremo Festival in 1964 .

Today Robertino Loreti is particularly popular in Scandinavia and Eastern Europe. It was also well known in the former Soviet Union : In the 1979 children's film The Electronic Doppelganger , it is used as a synonym for a beautiful child's voice. Sergei Paramonov (1961–1998), who was famous in the Soviet Union in the early 1970s , has been compared to him, for example in the 44-minute documentary Sergei Paramonov. A Soviet Robertino Loreti (2006).