This article deals with the environmental and conservation organization Robin Wood. For other meanings, see Robin Wood (disambiguation) and Robinwood . 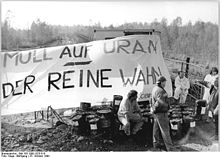 Blockade of the Lichtenberg landfill in the former uranium mining area of Wismut AG, 1990

Robin Wood's raft at anchor on the Rhine in Cologne during her campaign “Change of electricity now! You can raft! ", 2007 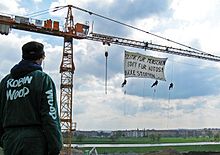 Crane occupation against the Waldschlösschenbrücke in Dresden

Tree occupation against the Waldschlösschenbrücke in Dresden

The organization was founded on November 13, 1982 by a dozen environmental activists in Bremen : The former Greenpeace members no longer wanted to carry out planned actions, but instead wanted to start their own. The name is based on the figure of Robin Hood : Instead of like Robin Hood as the "avenger of the disinherited", Robin Wood described himself as the "avenger of the defoliated". At that time they left Greenpeace in order to be able to devote themselves more to the issues of forest dieback and acid rain . Over time, other topics were added, so that Robin Wood is now divided into the four subject areas of forest , tropical forests , energy and transport . Robin Wood sees itself as a grassroots, non-violent community of action.

Two activists of the environmental organization were asked to pay a total of 8,450 euros on November 21, 2010 because of their track blockade. A criminal case will be examined. Since there was no legal basis for collecting the costs, the Schleswig Administrative Court overturned the corresponding fee notices from the Bad Bramstedt Federal Police Department on December 17, 2013.

The association is recognized as a non-profit organization and is largely financed by donations and membership fees. In Germany it has around 1,400 voting members and around 3,500 sustaining members. There are currently regional groups of various sizes and activities in around ten cities and regions. A total of twelve permanent employees work in the federal office, the magazine editorial office and the press office, including the specialist departments, which have been housed in a joint office in Hamburg-Harburg since March 14, 2016 .

Of the voting members, those of the regional groups as well as the employees exercise their statutory right to elect representatives for the assembly of delegates. These elected delegates meet several times a year to decide on the politics and activities of the association - here the principle of consensus is sought.

Robin Wood is a member of the German Nature Conservation Ring .

The focus of the association's work is on measures to improve the criticized conditions in nature through certain forms of public relations . Robin Wood tries, through nonviolent actions, to raise people's awareness of what they consider to be the most pressing ecological problems.

These actions include protests such as climbing or occupying buildings and revealing banners, but also environmental education at public events or in schools. In addition, research and publications are published and the ROBIN-WOOD magazine is published quarterly. Current topics are presented on a self-built raft that has been in Germany in recent years. Also in 2014 there was a raft tour from Berlin to Hamburg under the motto Don't let the energy transition overturn .

The campaigns, information stands, lectures and publications are partly carried out by volunteers . The content-related background work is provided by the specialist groups with the support of specialist speakers.

Campaigns dealt with the background of paper production or the use of tropical wood in paper products or everyday objects or the destruction of tropical forests for oil palm monocultures . The association provides information about existing quality seals such as the Forest Stewardship Council and promotes the use of recycled paper, especially in schools. In 2009 Robin Wood terminated his membership at FSC-International in protest and limited himself to participation and membership in the FSC working group Germany. In addition, the association ran a campaign against disposable cups under the motto "Avengers of the cups - forest protection instead of disposable cups". Protests against coal-fired power generation were also a topic that was accompanied by actions. Other topics are uranium transports through Germany and fracking .

Robin Wood spoke out against the privatization of Deutsche Bahn AG and the extensive subsidization of air traffic . In addition, they call for consistent measures against particulate matter pollution .