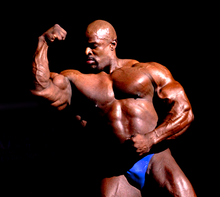 Ronald Dean "Ronnie" Coleman (born May 13, 1964 in Monroe , Louisiana ; also called "Big Ron" or "The King") is an American bodybuilder . He has won the Mr. Olympia eight times and is a record holder together with Lee Haney .

Ronnie Coleman started in 1991 at the Amateur World Championships of the International Federation of Bodybuilding & Fitness (IFBB) in Katowice, Poland, and triumphed in the heavyweight class. With a body weight of almost 97 kg, he was one of the lightest winners in recent years. Coleman then switched to professional life and in the following year he took part for the first time in the Mr. Olympia competition, which has the highest athletic value in bodybuilding. In this competition, in which the Englishman Dorian Yates was able to win the first of his total of six Mr. Olympia titles, Coleman did not reach the round of the last 15 starters. After Coleman could not qualify for the Mr. Olympia in 1993, he started again in 1994 and finished 15th in the final. 1995 Coleman won his first professional win at the Canada Pro Cup , which he repeated the following year. In the same year Coleman improved to 10th place in the Mr. O. In the following two years Coleman always managed to make it into the top 10 at the most prestigious tournament, although he remained rather inconspicuous with places six and nine.

The breakthrough for Coleman followed in 1998. After he was able to win one of the traditional competitions with the Night of the Champions , he surpassed this triumph again at the Mr. Olympia and prevailed in the absence of the retired defending champion Dorian Yates wafer-thinly ahead of Flex Wheeler . By 2005 Coleman won this tournament eight times in a row, equaling the record of his compatriot Lee Haney , who could also win this title eight times between 1984 and 1991. Since the beginning of the 21st century, however, a serious competitor for Coleman for the Mr. Olympia grew up with Jay Cutler . After Coleman was able to refer this to the second place four times in the Mr. O. (2001, 2003-2005), he finally had to bow to his nine years younger opponent in 2006.

In the run-up to the 2007 Mr. Olympia, the public was eagerly awaiting the decision whether Ronnie Coleman could regain the title. However, this project failed because, in the opinion of many observers, Coleman no longer had the shape of the last few years in this competition. While Jay Cutler was able to defend his title, Coleman ended up finishing in a flattering fourth place. Nevertheless, the audience said goodbye with a standing ovation, as this was also his last appearance on a Mr. Olympia stage.

After Ronnie Coleman underwent some back surgery, he temporarily lost the ability to walk.

Ronnie Coleman started training with weights as he got a free membership in the Metroflex Gym; his favorite exercise is lunges. Even while he was able to win the Mr. Olympia, he continued to work as a police officer with the Arlington Police Department (Texas). Coleman is a devout Christian who lives in Arlington ( Texas ) and has two daughters. The extinct brackish wasp Colemanus from the Green River Formation in the western part of the USA is named after Coleman . The name of the dedication was given to the form by the first description of the shape due to the heavily sculpted mesosoma , which they associated with Coleman's pronounced back muscles.

List of holders of the title of Mr. Olympia