The moths reach a wingspan of 30 to 40 millimeters. A sexual dimorphism can be seen between the two sexes, i.e. they are colored differently. The males are bright orange and have a pattern of black cube spots and cross bars. The females are very variable in color. Mostly the fore and hind wings have a different basic color. Basically, the front wings are gray-brown and the rear wings are orange, each with a black pattern. The undersides of the wings are the same in both sexes: The hind wings are cream-colored and have two orange cross bars and numerous black spots.

The caterpillars are about 28 millimeters long. They are white with numerous bluish-black lines and structures. On their back they have two rows of orange spots from which orange thorns with white tips arise.

The animals are found in North Africa , Europe excluding the North, Turkey and the warm areas of Asia to western China . In the south you can find them up to an altitude of 2,700 meters, in Europe up to 2,300 meters. In Germany they are more common in places, especially in the southern mountainous region, but in some cases they are in decline. They are rare in the north. They live in warm, sunny and dry places, such as B. stony dry grass and rocky southern slopes. In Austria the populations have dwindled a lot everywhere. 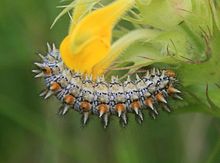 The females lay their eggs in piles on the underside of the forage plants. The caterpillars live solitary from the beginning. They overwinter half-grown with a length of approx. 10 millimeters in empty fruit capsules of various plants, such as B. Cowslips . They pupate in June on dried up stems in tumbled pupae that are colored similar to the caterpillars.