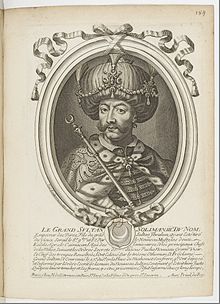 Suleyman was a son of the Sultan İbrahim and succeeded his older brother Mehmed IV after his deposition to the throne. After spending forty-six years of his life in the " Kafes ", a kind of luxury prison within the Topkapi Palace , he was ill-prepared for the accession to the throne.

When he was approached to inform him of his accession to the throne, his first reaction was a fear that the delegation had come to kill him on his brother's behalf. The circumstances after he came to power were not likely to reassure him. One of the most violent uprisings of the Janissaries ended with the murder of the Grand Vizier and the mutilation of his family, accompanied by general massacres and looting throughout Constantinople .

The war against the Holy League that began with the Ottoman attack on Vienna in 1683 turned into a chain of disasters for the Ottoman Empire. During this time, Süleyman appointed a third important member of the Köprülü family as grand vizier and gave him a free hand. Köprülü Fazıl Mustafa Pascha restored order in the state. In the following reforms, the situation of the Christian subjects of the Porte was significantly improved.

With the improved administration, the tide seemed to be turning again in the war in favor of the Ottomans, but in fact only the Holy Roman Empire was militarily tied to something else due to the Palatinate War of Succession (1688-1697) . The reconquest of Belgrade at the end of 1690 was the last important event of Süleyman's reign, which ended with his death in 1691.