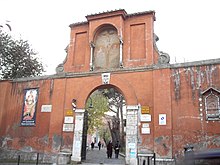 Portal to the forecourt, basilica and catacomb of San Pancrazio 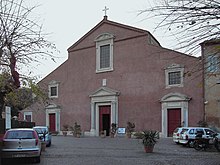 San Pancrazio is a titular church in Rome , Piazza di San Pancrazio 5, outside the medieval city walls. It has the rank of a minor basilica .

The basilica is located in the Monte Verde district near the park of Villa Doria Pamphili , about 1 km southwest of Porta Aurelia , today's Porta San Pancrazio. An ancient burial ground and an early Christian catacomb have been located here in the vicinity of the ancient Via Aurelia since the 1st century , in which, according to tradition, the young martyr Pancratius had been buried around 303–305 AD after he was persecuted by the Christians under Diocletian had fallen victim and was beheaded at the site of today's church. According to the Martyrologium Hieronymianum (431–450), his cult is attested as early as the 5th century; it lists May 12th as the feast day of Pancratius. Pope Symmachus (498-514) had the first church and other buildings built over the presumed grave to supply the pilgrims; in the Liber Pontificalis (I, 262) even a bath is mentioned. Next to the church, Pope Gregory the Great founded the Benedictine monastery of St. Viktor in 594. Under Pope Honorius I (625–638), instead of the first church building, a larger three-aisled basilica (55 m long) was built, with a transept and adjoining apse in the northwest.

Interior of the church after the Baroque era

Altar above the memorial stone in the right aisle

Under the choir and crossing there is still a ring crypt with access to the grave of the patron saint under the altar . The altar also had a fenestella confessionis , a small opening for a view of the relics . Depending ten columns with spoils - capitals bore the arcades of the nave. The original apse mosaic was lost. As a result of alterations and restorations, especially in the 15th and 17th centuries, the building elements of the 7th century were reshaped and can no longer be seen in the interior of the church today; only the remains of the crypt with the martyr's grave and four gray granite columns with spolia capitals in the transept have been preserved; also the memorial stone for Pankratius, who is said to have been beheaded at this point. In 1517 the basilica was elevated to the title church . In 1606, Cardinal Ludovico de Torres was a great innovator of the Church. Today's baroque furnishings go back to him, with the canopy over the high altar and the coffered ceiling , which contains a representation of Pancras with sword and palm in the middle. In the 17th century the church was given to the Carmelites .

The head of the martyr Pancratius, which was kept in the Lateran basilica from 850 to 1966 , rests today in a silver bust reliquary in the right aisle, above a baroque relief depicting his decapitation. The remaining relics holds the sarcophagus of porphyry under the main altar.

In the catacomb under the right aisle of the basilica were u. a. the 3rd century cubiculi of St. Felix of Nola and St. Sophia of Milan with their daughters Fides, Spes and Caritas uncovered and restored; they are accessible from the right aisle. In the Cubicolo di S. Felice , wall paintings from the early 4th century with a ship, dolphin, birds, flowers and branches have been preserved. In another cubiculum the name of the person buried there is found in Greek letters with the additional, extremely rare additional designation as Christian: ΒΟΤΡΥΣ ΧΡΙΣΤΙΑΝΟΣ.