Sarah Hegazi ( Arabic سارة حجازي, DMG Sāra Ḥiǧāzī ; * 1989 ; † June 13, 2020 in Toronto ), also spelled Hijazi, was an Egyptian LGBT activist who was arrested and tortured in custody in 2017 for holding up a rainbow flag at a concert . After she was released from prison and escaped to Canada, she committed suicide.

The studied software developer and openly lesbian Hegazi attended a concert by the Lebanese indie pop band Mashrou 'Leila in Cairo in 2017 , whose front man Hamed Sinno is openly gay . One photo shows Hegazi, who is believed to be sitting on someone's shoulders and smiling, holding up a rainbow flag. A few days after the concert, extensive police raids took place on the concert-goers, during which at least 75 people were arrested and sentenced to up to six years in prison for "debauchery". These raids were part of an effort to crush support for homosexuality in Egypt . Hegazi was the only woman arrested. She was taken to al-Qanatir women's prison north of Cairo. According to the company it suffered humiliating interviews, electric shock torture , abuse of detainees and incommunicado detention . According to the Lebanese non-governmental organization Afemena, she was physically and mentally ill-treated while in detention. After three months, she was released on bail of EGP 2,000 (109 euros).

Hegazi called herself a communist. The LGBT activist was a co-founder of the Bread and Freedom party in Egypt and was committed to human rights in Egypt, but also mobilized against the atrocities committed in Syria. In Canada she got involved in the Spring Socialist Network . Nine years after the revolution in Egypt in 2011 , Hegazi wrote, “The old regime will try everything, even the sacrifice of important icons of its regime, in order to remain in power or to regain that power,” described President al-Sisi as “the most oppressive and brutal dictator of our modern history ”and wrote,“ Revolutionaries are certain this is a class struggle ”. She went on to write in this article that "as a result of the incomplete revolution, most of us are now in the grave, in prison or in exile". About her time in the Egyptian prison, Hegazi wrote: “I was in prison for three months and they put me in a solitary cell, with no fresh air, no conversations, no people, so I developed a depression and couldn't look anyone in the face. “There is no political life, only the one voice of the military, of the regime. In an article for the news website Mada Masr in 2018, she wrote: “After my release, I was still afraid of everyone. A year after the Mashrou'-Leila concert, I haven't forgotten my enemies. I haven't forgotten the injustice that dug a black hole in the soul and made it bleed - a hole that doctors have not yet been able to heal. " 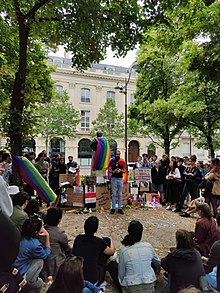 Commemoration ceremony in honor of Sarah Hegazi in Paris

After her release from prison, she lost her job as a software developer because of her resistance to the Sisi regime and was attacked by some family members. For fear of being arrested again, she decided months later to flee to Canada and seek political asylum there. However, she suffered from post- traumatic stress disorder and depression , which she described continued to get worse after her mother passed away. She committed suicide in her Toronto apartment on June 14, 2020.

After her death, a manuscript, allegedly drafted by her widespread in social media suicide note in Arabic in which she turns to her siblings, her friends and the world. She wrote: "To the world - you were very cruel, but I forgive." International media reported her death.

Hamed Sinno shared a homage on his Facebook profile that said: “لروحك الحرية”, meaning “freedom for your soul”. He continued: “Many people quickly point to mental illness and their depression. But mental illnesses do not exist in a vacuum. ”They are the result of structural violence that“ heteropatriarchal capitalism ”exerts on the body. The assumption that people in exile can escape structural discrimination is wrong, writes Sinno: “We spend the first part of our lives requesting air in our home countries and then just go to countries where we are promised air to find out that our lungs have been stolen. Continuing not to address the structural inequality that causes so much suffering is a crime. "

Online trolls and other commentators also reacted to Hegazi's death. Her name was associated with the Lot people on Twitter in Egypt , a reference to a passage from the Koran that deals with the punishment of homosexuals.

Canadian Spring magazine published an obituary for Hegazi in which Valerie Lannon wrote, “I remember her saying, 'I never felt as alive as I did during the revolution! In her honor and in order to fulfill our own meaning in life, it is our task to continue the fight for the revolution here, in Egypt and everywhere. "

The Egyptian-American feminist Mona Eltahawy wrote on Twitter: “The regime is homophobic and it knows that Egyptian society is homophobic. Homophobia kills. "

In Malta, activists demonstrated in front of the Egyptian embassy in Ta 'Xbiex ; the human rights organization Moviment Graffitti criticized Malta for classifying Egypt as a “safe country of origin” to which refugees can be sent back.

Under the hashtag #RaiseTheFlagForSarah, people from all over the world expressed their solidarity with Sarah Hegazi on Twitter and shared the incriminated photo of her at the concert.