The Schauinslandbahn is the longest after the circulation principle designed cable car in Germany and the world's first of its kind for passenger transport. It leads from the valley station in Horben near Freiburg im Breisgau to the 1284 m high Schauinsland . The mountain station is a little below the mountain summit at 1220 m and a few hundred meters to the southwest. It was opened in 1930 and technically overhauled and renewed in 1987/1988.

The valley station of the Schauinsland cable car is located in the Bohrertal in the municipality of Horben at an altitude of 473 m above sea ​​level . The distance to the mountain station at 1220 m in the Freiburg district is 3480 m (horizontal length) or 3565 m ( inclined length ). For the sake of simplicity, a length of 3600 m is often mentioned, which is the length of the (sagging) ropes, which is slightly larger than the inclined length. The cable car overcomes an altitude difference of 746 m. The largest span of the cable car is 734 m between pillars no. 6 and no. 7. It reaches its greatest height above ground at 67 m. A ride takes 15 to 20 minutes.

In principle, it is a two- cable circulating ropeway , but with the special feature that the train has a suspension cable on each lane , but the cabins are moved by two circulating, endlessly spliced traction cables .

The 37 conductorless cabins for up to eleven people travel at a speed of up to 4 m / s (14.4 km / h) and can transport up to 700 people per hour in one direction. In normal operation, 500 people per hour are transported with seven people per cabin, corresponding to the number of seats. In 2018 there were almost 381,000 passengers. In addition, a revision gondola can be coupled into the circuit. The cabin sequence can be varied freely, the minimum distance is 227 m.

Before the renovation in 1987 and 1988, there were ten large cabins for 24 people and one conductor , which was required for such large cabins. They carried the guests up the mountain according to the timetable. At the same time, there were a maximum of eight cabins on the route, while there was one cabin each for getting on and off in the valley and mountain stations. At that time, the train stopped at the middle station to get off. B. the spectators of the Schauinsland race could be in the middle of the action. The cabins had interior lighting; the conductor could talk to the colleague in the control station of the mountain station by telephone and also sound a warning bell there. In the event of an emergency that the cable car could no longer be moved even with the auxiliary motor, the cabins had life bags and abseiling devices. The cabins with their hangers and the eight-roller carriage looked similar to those of the large aerial tramways , which were previously the only aerial ropeways for passenger transport. They had an empty weight of 1500 kg and a payload of 2000 kg. They drove at a speed of up to 4 m / s and with a distance between cars of at least 900 m and a maximum of 3600 m. They were automatically engaged and disengaged in the stations, but the pull ropes had to be stopped. The original railway also had an inspection car for rope control and material transport, which could be coupled if necessary.

Anchoring a suspension rope in the mountain station

The fully locked suspension ropes have a diameter of 50 mm. They are not continuous, but divided into four sections of 1,800 meters each, which are anchored to the strong bollards in the mountain and valley stations. Halfway along the cable car there is a tensioning station that looks like two connected cable car supports. In it, the two sections coming from the valley and the mountain are connected with large concrete weights hanging freely in the station. The two carrying ropes coming from the valley are tensioned in this way with weights of 58 tons each and the two sections coming from the mountain with weights of 52 tons each. This tensioning station originally served as a middle station for getting on and off.

The two pull ropes each have a diameter of 25 mm. They are driven in the mountain station by a traction sheave with a diameter of 5 m and an electric motor. There is also a smaller auxiliary motor for emergencies. They are tensioned in the valley station by two tension weights, each originally 17.6 tonnes, and since the renovation 20 tonnes each.

The ropes run on the route over the tensioning station and seven other cable car supports, five in the lower half and two in the upper half. The tallest of these steel truss structures is 37.5 m high. The largest span of the cable car is 734 m between pillars no. 6 and no. 7. In addition, in front of the mountain station there is a dome structure on which the ropes are led in a large curve from the ascent to the horizontal system in the station.

Share for 100 RM in the Schauinslandbahn AG from May 1930

In 1908, the then mayor Winterer tried to convince the city council of Freiburg of the need for a train to the Schauinsland in a speech. In the following year, the Privy Councilor Georg Benoit , professor at the Technical University in Karlsruhe, and Ernst Heckel submitted their first project drafts, followed by proposals from various manufacturers of funicular and cable cars . Public opinion was far from convinced and the First World War thwarted all plans. In 1925, a study commission was finally appointed to support a new design by Heckel. Despite the opposition in the press, the Schauinslandbahn AG was founded in 1928 at the instigation of the city , which commissioned the company Gesellschaft für Fördertechnik Ernst Heckel mbH Saarbrücken and Achern (Baden) to build the cable car.

The design was significantly influenced by Georg Benoit's investigations and tests at the Technical University in Karlsruhe and his negotiations with the approval authorities. The building for the valley and mountain stations was designed by the Freiburg architect Robert Mühlbach (1875–1975). The original ropes were supplied by Felten & Guilleaume Carlswerk AG in Cologne-Mülheim , which at the time was the largest wire rope factory in Europe and has also been the main shareholder of Ernst Heckel's company since 1927. The entire electrical equipment was supplied and installed by Siemens-Schuckertwerke , Berlin.

A good year after the foundation stone was laid, the Schauinslandbahn was put into operation on July 17, 1930 as the world's first passenger ropeway based on the circulating principle.

On November 26, 1932, a tragic accident overshadowed the smooth running of the railway. Due to a serious operating error on the part of a conductor, only one pull rope was coupled to the train. As a result, the cabin got over the fallen pulling rope and was levered by the carrying rope shortly before the valley station. The cabin fell 13 meters down, killing three people (including the conductor). After extensive investigations, which confirmed the basic safety of the railway, operations could be resumed in January 1933. Since then, operations have been accident-free.

During the Second World War , the number of passengers rose from 140,000 to 240,000, although in 1944 and 1945 it was only possible to drive at night due to the constant threat from aviators. During this time, however, the railway had among other things, set up on the mountain evasive lazarette supply. On December 3, 1944, the university hospital housed in the Hotel Kyburg was attacked by British airmen. Despite the storm, over a hundred children were transported to an emergency accommodation on the mountain with the Schauinsland railway during the night.

At the beginning of the 1950s, Heckel built the Caracas cable car in Venezuela , based on the Schauinslandbahn model , a further development that was, however, more than twice as large.

In 1987, after 56 years and approx. 12 million passengers, operations were temporarily suspended and a fundamental renovation began, during which the entire control technology was renewed and the large cabins were removed. The conversion was carried out by PWH (Pohlig-Weserhütte), a successor company of the Ernst Heckel company. The Schauinslandbahn received 37 new, smaller cabins (capacity: a maximum of eleven people or 825 kg), which no longer have to be accompanied by conductors. The renovation was completed on December 6, 1988. The entire driving operation was partially automated. This and the higher number of cabins made it possible to achieve a greater transport performance. The trips can now be offered as required, which also significantly reduced waiting times. Nothing was changed in the construction principle, the cable car is still the longest cable car in Germany based on the circulating principle. 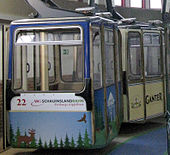 Cabins with photovoltaic modules on the roof for ventilation

From November 2012, the cable car was completely overhauled for around three million euros by Garaventa, a company in the Doppelmayr / Garaventa Group . Two of the four old suspension ropes were exchanged for suspension ropes with integrated fiber optic cables and the two old ones were shifted by nine meters each using the usual procedure so that other areas are stressed. In addition, the electrics, drive and brakes were renewed. The cable car went back into operation on April 30, 2013.

The Schauinslandbahn was named " Monument of the Month September 2013" by the Baden-Württemberg Monument Foundation.

Since the cabins heated up to 35 ° C in summer despite the small windows, additional solar-powered ventilation was installed in 2015. Since then, the cabins have had two photovoltaic modules on the roof.

A functional model of the railway was brought out by the Brawa company on an N scale with the original cabins from 1930.