Monitor and keyboard of an "Aston Ethos" font generator

A font generator is a computer whose main task is to convert typeset texts into a video signal . It is used for fade-ins in television programs such as waistbands or bracing and is therefore part of the on-air design of a television station.

Next it is z. B. is common in sports broadcasts to connect external data sources such as timing devices to the font generator, which converts the data into screen graphics without the intervention of an operator.

Hardware title generator for home and semi-professional use (1994; operation takes place via a pen on a drawing surface) 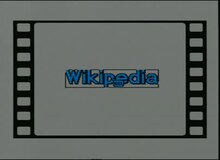 Play media file
Generation of a title with the hardware title generator shown above (1994; the menu is displayed on the TV screen and controlled by moving the pen on the drawing area)

Even before the introduction of computer technology, films and television programs were given opening credits or credits in which the people and companies involved were listed. First and foremost, these were hand-painted panels that were filmed by a film or television camera and only later cut into the finished product.

Gradually, however, it became fashionable in film trick technology to copy the title into the moving film image with the help of an optical bench . However, this was a photographic effect that was very difficult to achieve with the electronic medium of video.

After the introduction of the keying technology , the titles were drawn on special cards or foils and filmed by a camera. This camera image was then electronically mixed with the actual image signal. Scroll or crawl titles were created by filming a text applied to a roll. An example of this can be found on the popular television program Dinner for One . The laying trick , which had to be pre-produced, was used for more complex animations .

The invention of a computer-aided system therefore represented a considerable simplification, since the titles could now be created in a cost-effective and time-saving manner, flexibly edited and relatively easily saved for later use. 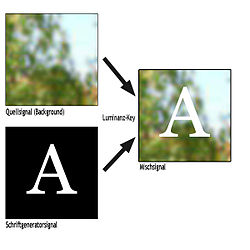 Example of a luminance key

Example of a linear key

Font generators are often specially designed computers, the hardware of which has to meet special requirements for stability and signal quality. The font generator is often delivered as a complete package consisting of software and specialized hardware. However, there are also font generators that are integrated as software in existing video editing programs, e.g. B. Adobe Premiere , Avid and Final Cut Pro .

With the hardware font generators, the texts are set on the screen, passed on to an image mixer as an analog or digital video signal and mixed there with the main image, the background signal . This usually happens “live”, i.e. in direct temporal connection with a television broadcast or production.

So that the video signal of the font generator, the fill signal , does not completely cover the background image , it has to be keyed , i.e. masked. The written signal is “cut to size” in such a way that only its relevant parts, i.e. letters and graphics, can be seen in the mixed signal. The technical facilities for the key process are now mostly completely integrated into the vision mixer.

The so-called downstream key is often used for the fade-in itself . However, this does not designate a special key technology, but a special component of the image mixer. The fade-in is only superimposed on the image at the end of the signal chain within the image mixer, i.e. after all other image processing has already taken place. This makes it possible to access the clean feed before this last processing step. This is an image signal that does not have any overlay from the font generator.

Various methods can be used in keying. This is often done using a luminance key that makes the darkest parts of the font generator signal transparent. However, this only makes sense if the font is relatively light and the font generator signal does not contain any areas that should be dark on the one hand, but also opaque , i.e. not transparent. If the contour of a letter is black, for example, in order to make the letters visible on light backgrounds, the luminance key would also display this contour transparently.

It is common to work with a so-called linear key : In addition to the actual video signal, another signal is sent to the video mixer, the key signal , which describes the transparent parts. This signal is comparable to the alpha channel in image processing.

The key signal has to be imagined as a fully resolved black and white television signal. The brightness of a given pixel of this signal is decisive for the transparency with which the corresponding pixel of the fill signal is placed over the background signal.

At a lower level, all font generators are based on character generators , which do the basic display of (individual) characters on a screen.

With the development of technology since the early 1980s, it became possible to include graphics in the set text, to work with several levels or to animate the texts and graphics. Today the possibilities offered by a font generator have grown considerably: You can now also integrate video sequences and create complex 3D animations. This combines the areas of application of a font generator with those of a digital video effects device .

The Commodore Amiga was a computer system designed for video applications from the start. Above all, its genlock capability - together with overscan support - made it a device that was often used in video studios from the mid-1980s. A separate genlock interface fed the studio clock to the Amiga from outside, synchronizing the whole computer to this clock so that its video output could be mixed with other studio signals without any problems, the latter often in the genlock interface itself. The type of display could be used can be varied from hard overlay to soft fade-in. For the first time, with simple programming of a microcomputer ( if necessary in BASIC ), effects such as overlaying texts in any size, color and design and any other graphics - all of which can be animated on request - can be implemented with a simple desktop device. For a long time, a special application was the use of Amigas to generate the station logos in one of the corners of the screen.

Due to their computing power, today's PCs are quite capable of taking over the work of a font generator. However, this only applies provided that suitable expansion cards are installed that provide a video signal of sufficient quality. Usually this is an SDI signal . The quality of the composite signal of a normal consumer graphics card is not sufficient. The better quality component signal must also have a sufficient bandwidth. If the font generator is used in live broadcasts, the requirements for the stability and reliability of the software and hardware are also significantly higher.

In general, there is currently a transition from pure special solutions to systems based on PC technology. An example of this are the Chyron systems, which run under the Windows operating system but are still sold as complete systems. However, PCI expansion cards are also available with which a normal PC can be upgraded to a font generator.