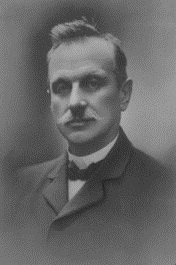 Scipione Riva-Rocci (born August 7, 1863 in Almese / Province of Turin , † March 15, 1937 in Rapallo ) was an Italian physician, pathologist and pediatrician and the first to describe the blood pressure measurement method named after him using a pneumatic arm cuff for a blood pressure monitor .

In 1888 Riva-Rocci received his PhD and graduated from the University of Turin in internal medicine and surgery. He then worked as an assistant at the Propaedeutic Medical Clinic in Turin under Carlo Forlanini (1840-1918), who is considered to be the inventor of the technique of artificial pneumothorax for the treatment of pulmonary tuberculosis. There Riva-Rocci took part in his first experiments on the technique of artificial pneumothorax, examined with Antonini the respiratory function under load and altitude conditions and together with Cavallero the respiratory function of patients with a reduced pulmonary resorption area.

In 1894 Riva-Rocci qualified for the special pathology of internal medicine and in 1898 he followed Forlanini to the University of Pavia (Ospedale San Matteo). In 1900 he took over the management of the Municipal Hospital in Varese as director and chief physician for the next 28 years . From 1908 to 1921 he taught as a private lecturer in pediatrics (Habilitation 1907) at the Pediatric Clinic of the University of Pavia. 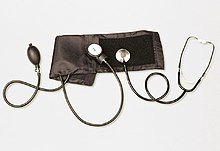 Riva-Roccis significant achievement is the first description of a pneumatic cuff on a mercury - blood pressure monitor (1896) that the soft tissues, and arteries of the upper arm evenly compressed and thus a simple indirect measurement of systolic blood pressure allowed.

The indirect, bloodless and easy-to-use procedure for determining blood pressure , which was presented at the Italian Congress of Internal Medicine in 1896 , quickly developed into the standard technique of medical diagnostics and made the treatment of hypertension easier . The core of the measurement is an upper arm cuff, which enables even, circular compression . At the same time, the doctor can comfortably feel the pulsation of the artery on the wrist with palpating fingers . Riva-Rocci recognized the middle of the upper arm as the most suitable place for compression and simplified the apparatus by using a rubber tube (a piece of bicycle rubber hose) that is looped around the arm instead of a rigid cylinder. The expansion of the inflated tube is limited by a circular leather strip. In addition to the mercury manometer, a rubber ball is required to inflate the cuff, and the patient must also bare the upper arm for a correct measurement. The blood pressure measured with the cuff on the upper arm and palpation of the pulse "according to Riva-Rocci" is abbreviated as "RR" (Riva-Rocci).

Riva-Rocci's method was substantially supplemented around 1905 by the Russian doctor Nikolai Sergejewitsch Korotkow : He described the use of the stethoscope with which the Korotkow noises named after him are listened to when the cuff is decompressed. The Korotkow sounds mark the systolic and diastolic blood pressure, which can then be assigned to a measured value on the manometer scale. The accuracy of the method was further improved by the minimum width of the cuff on the upper arm (10–14 cm) suggested by Heinrich von Recklinghausen . For the first time, it was also possible to measure using an oscillometric method without mercury.

The American neurosurgeon Harvey Williams Cushing (1869-1939), who had visited Riva-Rocci on May 6, 1901 in Pavia, to familiarize himself with the technology of blood pressure measurement on the spot, played an important role in the spread of the new blood pressure measurement method . He improved the device, and by 1910 the majority of American doctors were using similar devices.

Riva-Rocci also emerged as a translator of important contemporary medical standard works and published in many areas of general and special pathology .

To date, arterial blood pressure has been given in millimeters of mercury ( mmHg ) instead of the SI unit of Pascal .