A semantic network is a formal model of concepts and their relationships ( relations ). It is used in computer science in the field of artificial intelligence for the representation of knowledge . Occasionally one speaks of a knowledge network . A semantic network is usually represented by a generalized graph . The nodes of the graph represent the terms. Relationships between the terms are realized by the edges of the graph. Which relationships are allowed is determined very differently in different models, but most relationship types have a cognitive aspect. 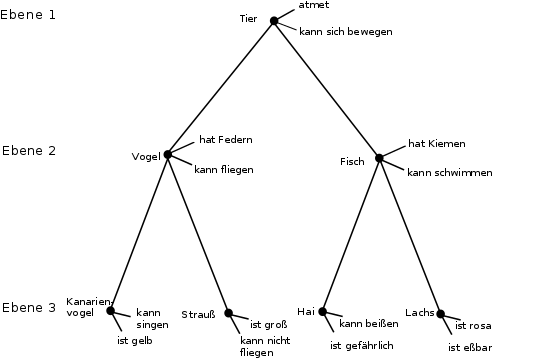 Hypothetical semantic network according to Collins and Quillian (* 1931)

A (mostly binary) relation between two graph nodes can be:

Overarching / subordinate concept relation
z. B. 'dog' is a sub-term to 'mammal', 'mammal' is a sub-term to 'animal'. This relation is transitive and asymmetric . Properties of the generic term are inherited on the subordinate term. Some semantic networks allow multiple inheritance. So 'banana' can be modeled as a sub-term of both 'tropical fruit' and 'plantation plant'. For the term generic term and the term is hyperonym used for the term under term the expression Hyponym .
Instance relation
this relation connects individuals with classes; z. B. Bello is an instance of the class Dog. This relation is asymmetrical and, in contrast to the above subset relation, it is not transitive. Counterexample: Bello is an instance of the class dog. Dog is an instance of the Species class . Bello as a dog individual is not an instance of the species class.
Partitive relation ( meronymy )
z. B. Bello's fur is part of him. The converse relation to this is called holonymy , e.g. B. a pea soup contains peas, a lot consists of elements, a window contains glass. This relation is asymmetrical. Also not necessarily true that A the Holonym to B is when B the meronym to A 's. The transitivity of this generic relation is not always given. Roger Chaffin has shown, however, that subclasses of the partitive relation, e.g. B. the element-group relation, are quite transitive ( Lit .: Chaffin, pp. 273–278).

The psychological reality of such semantic networks can e.g. B. investigate using association techniques and sentence verification tasks.

Polysemy and homonymy play a subordinate role in the modeling of semantic networks, since it is about relationships between terms. A polysemic (or homonymous) lexeme is assigned to two or more terms or lies in the lexical value range of two or more terms. However, it is often a difficult question in practice how many and which terms a lexeme can be assigned to.

A far greater problem for the modeling of semantic networks are lexical gaps. These are terms to which no simple lexical symbol can be assigned as a value in a natural language. A well-known example is the term 'no longer thirsty'.

Current knowledge representation methods based on semantic networks are the Semantic Network Processing System (SNePS) developed by Stuart C. Shapiro and the MultiNet paradigm of multilayered extended semantic networks by Hermann Helbig . For both approaches there are also tools to support knowledge acquisition and processing. MultiNet is particularly geared towards the semantic representation of natural language knowledge and is used in various natural language processing applications. 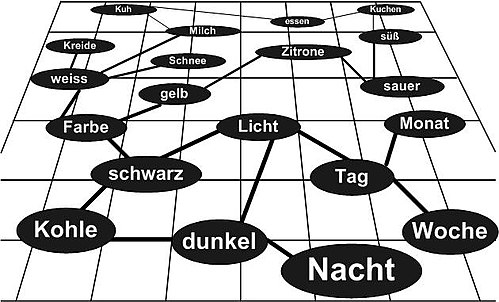 Association network of a person

As early as the winter semester 1789/90, Johann Friedrich Flatt described a network model of memory in his Tübingen lecture on empirical psychology - which was also attended by Georg Wilhelm Friedrich Hegel , Friedrich Wilhelm Joseph Schelling and Friedrich Hölderlin - to explain associative activations when recalling memory content.

As early as 1900, psychologists such. B. Gustav Aschaffenburg , conducted research into how terms are linked in our brain. It was found that certain words evoke the same associations in most people , for example white-black or mother-father. Associations make it possible to connect terms to one another on the semantic level, i. That is, words are related to each other for a reason. Words and meanings are neither alphabetically nor completely unorganized in the mental lexicon, but are stored in a network. The meaning of a word is represented in such a network by nodes and by neighborhood relationships to other contents or terms. Such networks can be derived from the associations just mentioned.

The WWW as a semantic network

According to Tim Berners-Lee , a semantic network (→ semantic web ) should be spanned over the part of the Internet ( WWW ) that is organized as a hypertext . The content of the resources that make up this hypertext should be described with metadata. This resource description should be done with the help of a Resource Description Framework (RDF). The Web Ontology Language (OWL) should be used as the modeling language . The aim is that the expressions used in the metadata are given well-defined meanings that can also be interpreted by machines. This would e.g. B. enable content-related information searches. Not all terms should be captured globally in a complex ontology , but a rather loose network of decentralized, specialized ontologies should arise.