The title of this article is ambiguous. Further meanings are listed under Shan (disambiguation) .

The Shan live mainly in Shan State with the capital Taunggyi in eastern Myanmar, where they form the largest minority with 8.5% (around four million). Other sources put the number of Shan at seven to eight million, although not only this Tai people , but also Pa-o, Padaung , Wa , Kachin , Akha and Lalu are included, and more likely the total population of the Shan state is called. Small groups of Shan can also be found on the border with the Chinese province of Yunnan , in Laos and in Thailand . The population officially counted as Dai nationality in China is closely related to the Shan or at least partially identical with them. Historically, they have the same origins and also have cultural similarities.

There are twelve subgroups of the Shan, but for the most part they feel that they belong to the Shan and not as different ethnic groups. However, the exact assignment is controversial, as many Tai languages ​​are quite similar. There are also clearly different dialects and traditions. A distinction is made between northern, southern and Chinese Shan according to culture and dialect and the following subgroups: 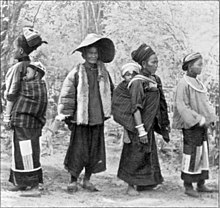 The Shan are 650 BC. Immigrated from present-day China to their present settlement area. At the end of the 13th century they ruled Burma with the Kingdom of Ava , and by the middle of the 14th century they had extended their empire to Yunnan in China, Tenasserim in southeast Burma, Assam in India and parts of Laos and Thailand.

At the end of the 16th century, the Shan were subjugated by the Burmese , and 50 years later the Chinese ended the Shan monarchy. The Shan State became a British protectorate in 1887 , in 1922 the Shan were given their own status and the British created the Federated Shan States.

The 1947 Panglong Treaty between Burma and the Shan paved the way for the constitution of the Union of Burma, which was followed by mutual independence in 1948. The Shan were assured in the agreement that they would be able to break away from the Union after a period of ten years.

In 1952, the Burmese army occupied Shan State on the pretext of fighting the Kuomintang from China. Since it became clear in 1957 that the Shan state could not break away from the Burma Union, as promised in the Panglong Treaty, students went into the armed underground to force their independence militarily.

In 1962 the Burmese military staged a coup and repealed the constitution. The Shan State Army (SSA) was founded in the 1960s through the merger of several groups. The armed struggle was financed by growing opium, among other things . In May 1973 the Burmese government and the United States agreed to combat poppy cultivation. The Chinese Shan Khun Sa (alias Chang Shi-fu ), an opium dealer, built a militia between 1965 and 1969 that initially supported the government. The name of the militia was Ka Kwe Ye and the deal with the government was that the Ka Kwe Ye could use the national infrastructure to trade opium if in return they fought the communists. From the Ka Kwe Ye, Khun Sa built the Shan United Army (SUA). In 1985 he joined forces with Mo Heing (aka Korn Jerng ), who founded the Shan United Revolutionary Army (SURA) in 1982 . The SURA had previously merged with a spin-off from the SSA to form the Tai Revolutionary Army (TRA). SUA and TRA now formed the Muang Tai Army (MTA), which was commanded by Khun Sa. The United Council of Shan State was chaired by Khun Saeng , the uncle of Khun Sa, and later by Mo Heing. After his death in July 1991 Khun Sa took over this position. This so-called national Shan movement was nothing more than a drug organization. In 1993 the MTA had 8,000 men under arms, many of them children. In the 1990s, the MTA was defeated by government forces. Khun Sa surrendered in 1994 and continued to live as a businessman. A spin-off from the MTA, the Shan State Army-South (SSA-S), continued the fight against the government.

In December 2011, the Shan State Army signed a peace treaty with the new government. However, fighting with the government army and human rights violations such as rape continued. 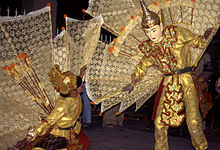 Most Shan are Buddhists , but Hinduism , Islam and animism are also common.

The language of the same name Shan belongs, like Thai , to the Tai languages . Most of the Shan are farmers and live from growing rice, vegetables, soy and fruit, but precious stones and teak are also extracted in the region. Blacksmithing, gold and silver work are traditional. The cultivation of opium is widespread but is largely in the hands of the government army.