Sonneborn, view from the west 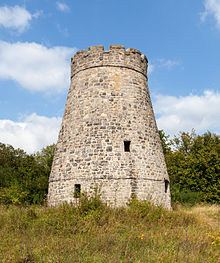 Windmill stump on the Saalberg

Sonneborn is a district of the Lippe town of Barntrup in North Rhine-Westphalia .

Sonneborn is located in the eastern part of the Lippe district in the Lipper Bergland . In the east of the Teutoburg Forest / Eggegebirge nature park , it is located around three and a half kilometers northeast of the Barntrup core town and about one kilometer northwest of the border with Lower Saxony with Bundesstraße 1 running along the border and tangent to the village to the south . To the northwest lies the Saalberg near Barntrup ( 342.9  m above sea level ) and to the northeast the Saalberg near Aerzen ( 266.4  m above sea level ). In Sonneborn of small springs lobster influx Grießebach .

Sonneborn was first mentioned in a document in the 13th century, but it is believed that there was a settlement more than 250 years earlier. Under the rule of the princes of Lippe , the settlement was pledged.

In the great village fire in 1650, almost all the farms burned down.

The soil in Sonneborn was not usable for agriculture. The residents' animals were grazed on communal areas called huts . The harvested grain was brought to the Saalberg near Barntrup , where a windmill was located in the 18th and 19th centuries. In 1928 it was converted into a lookout tower - known as the windmill stump and windmill pot .

In 1952 a school was built in Sonneborn in-house. It was closed again in the 1970s. The residents set up a village community center in the building .

On January 1, 1969, the place was incorporated into the city of Barntrup.

As is usual in Lippe , the majority of the population in Sonneborn is Protestant Reformed. The Evangelical Church Sonneborn belongs to the class Bösingfeld of Lippe Church .

The 51.4681 hectare nature reserve Knappberg lies near Sonneborn . It is entered in the directory of nature reserves under the number LIP-005 and the description of the hedge and grassland complex on the Sonnenborn plateau and the Knappberg .

The fire company Sonneborn is part of the volunteer fire department Barntrup.