The title of this article is ambiguous. For further meanings see Spielmann (disambiguation)

Minstrels in the Middle Ages

The minstrel (plural: minstrels ) or musician is a musician who plays on certain occasions for entertainment.

Historically, the term goes back to the time of the Roman Empire ( ludarii ). The term minstrel can be traced back to the 8th century.

The high medieval minstrel culture emerged towards the end of the 11th century, initially south and north of the Pyrenees, and spread throughout Western Europe in the course of the 13th century. The oldest names of the minstrels are joglar and jogleor. They entertained an affluent audience with the most spectacular feats possible. Instrumental players have also been among these minstrels since the beginning of the 13th century at the latest. The minstrel Guiraut de Calancon already counted nine instruments (such as fiddle , harp , and hurdy-gurdy ) that were played by jugglers .

Due to the sources, it is not possible to describe the roots of this early instrumental music in the West in more detail. However, a considerable number of pictorial representations of musical instruments used by minstrels have survived from this period . In addition to the reliefs on cathedrals and book illuminations, this also includes a number of illustrations in music-theoretical treatises . Herrad von Landsberg depicted musical instruments such as the harp and a hurdy-gurdy ( organistrum or symphonia ) in her Hortus deliciarum .

These are found primarily as miniatures in magnificent manuscripts , the most famous of which is an edition of the Spanish Cantigas de Santa Maria from the second half of the 13th century. This codex contains (in addition to a more than impressive collection of songs) a whole series of illuminations showing musicians (mostly in pairs) with various instruments. This manuscript was commissioned by King Alfonso X of Leon and Castile († 1284).

Numerous written sources testify that among the jugglers and spilleuten there were also traveling instrumental musicians in the course of the 13th century.

In this century, however, there is already a very clear upswing in cities. Alongside the respective rulers, these are gradually becoming the second funding body for instrumental music by employing “Stadtpifer” or “dromper”. Musicians guilds have existed since 1288; the oldest known is the Vienna Nikolaibruderschaft.

Thus, the decisive course for the modern instrumental musician was already set in the 14th century.

In addition, the military marching band has formed in the mercenary armies since the 15th century .

In order to meet the demands of a wide variety of occasions, a minstrel should master as many instruments as possible. The preferred instruments included percussion instruments, various flutes and wind instruments, as well as plucked and bowed instruments. The different names and designs of individual types of instruments were manifold. In general, the sound was generally relatively high (between soprano and tenor registers) and bright. It was only towards the end of the 15th and beginning of the 16th century that the bass region was strengthened and the pitch was lower. The instruments were divided into privileged (related to the reputation of the instrument and the social position of the player) and ordinary, as well as loud and quiet groups. Compared to today, they had a relatively limited range and were usually played at full volume without too great dynamic differentiations. Some instruments came, in partially modified form, from ancient or northern Europe. Others were specially imported from the Arab region and Central Asia as part of the Crusades .

These include shawm and bagpipes (bagpipes).

The following important information is missing from this article or section:
The fiddles and violins are missing here
Help Wikipedia by researching and pasting it .

The string instruments, plucked and bowed relatively quietly in comparison, such as the kink-necked lute , were primarily used to accompany the song.

This included the kettledrum and the hand drum .

The entire Middle Ages (as well as partly the Renaissance and also the Baroque) did not have any instruments or instrument combinations that were precisely prescribed for a piece of music. Usually the exact composition was adapted to the particular occasion and the available instrumentalists depending on the situation. It was not until the middle of the 15th century that vague regulations for ensembles for different types of music adapted to the occasion emerged. Quiet music in an intimate setting or with "romantic or religious text statements" was usually performed with stringed instruments, recorders, portative and singing. Loud music, mostly played on festive or representative occasions, was mainly made up of shawms, trumpets, trombones, percussion and flutes. 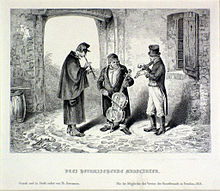 Minstrels moved from town to town as a free traveling people , played with the minstrel violin to dance, but also appeared as narrators - accompanied by the minstrel violin. As narrators, they sang love songs ("Minnegesang") or heroic songs ("Epics") on the one hand, but also news (including local news) on the other hand, which they picked up on the hike and processed into rhyme.

Minstrels who allied themselves to form groups are the forerunners of later traveling music and jugglers troops , which in turn became forerunners of wandering, later sedentary theater groups.

The term musician has been used since around 1600 and is significantly older than the term `` musician '' , who was involved in music professionally, around 1800 . He describes the transition from traveling to "honorable" musicians.

In the 20th and 21st centuries, musicians from the medieval scene in particular refer to themselves as minstrels or minstrels.