This article covers the airplane; for the film of the same name see Lindbergh - My flight over the ocean . 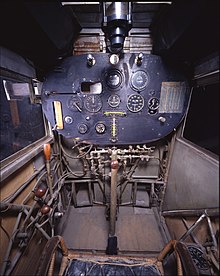 Spirit of St. Louis - View into the cockpit (top left the periscope)

Spirit of St. Louis - Side rear view showing the layout of the cockpit behind the engine and tanks, obstructing the view forward.

Spirit of St. Louis is the name of the long-haul aircraft Ryan NYP (registration number: NX-211) with which Charles Lindbergh crossed the Atlantic on May 20, 1927 and won the Orteig Prize for the first non-stop flight from New York to Paris .

With the name Spirit of St. Louis , Lindbergh expressed his gratitude to the private donors of this project, who came from St. Louis . In the model designation Ryan NYP NYP stands for the flight mission N ew Y orc P aris, for which the machine was constructed. In the officially assigned aircraft registration number N-X-211 , the X stands for experimental (German experimental aircraft ). 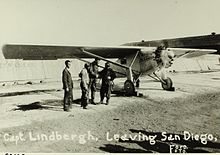 Lindbergh (2nd from right) in front of the Spirit of St. Louis shortly before the flight to St. Louis . (Image from May 10, 1927 on Rockwell Field on North Island , the northern end of the Coronado Peninsula near San Diego )

Propeller and engine of the Spirit of St. Louis

The Ryan NYP is a development based on the Ryan M-2 type by Ryan Airlines and was built in San Diego . It is a shoulder decker made of tubular steel and wood, which is covered with fabric. Unlike other aircraft built to win the Orteig Prize , it had only one engine , a Wright J-5 with 166 kW (223 hp ), which had self-lubricating rocker arm shafts and - as the first internal combustion engine - valves with sodium cooling . Lindbergh believed that if one engine failed on a fully loaded multi-engine aircraft, the remaining engines would not be able to keep the machine in the air. The risk of an engine failure increases with the number of engines.

The main tank is conveniently installed in the aircraft's center of gravity in front of the cockpit , the pilot can only see forward through a small periscope . Lindbergh did not use this either, as he was used to the fact that mail bags obstructed the view to the front as a former mail plane, and he orientated himself by looking out of the side windows. This position is also safer for the pilot, as he cannot be trapped between the engine and the tank in the event of a crash landing. In total, the Ryan NYP can fill up with 1705 liters of fuel , which at approx. 1300 kg makes up more than half of the maximum take-off mass of 2330 kg. The theoretical range of the machine is 6437 kilometers, that is approx. 4000 (land) miles (approx. 3480 nautical miles).

Everything on the aircraft is designed for low air resistance and especially low weight. That is why some instruments such as gasoline gauges or radio equipment have been omitted. Lindbergh knew the engine's hourly consumption and the contents of the individual tanks. That is why he did not need a fuel gauge, but switched back and forth between the individual tanks during the flight according to a precise schedule in order to keep the aircraft in trim and not to load one-sidedly.

Lindbergh was involved in the design of the aircraft and also oversaw the design process himself .

The starting point for the Paris flight was Roosevelt Field in New York and after a flight distance of 5808.50 km (3610 miles), Lindbergh landed on May 21 after 33 hours and 30 minutes at Le Bourget Airport in Paris. He won the Orteig Prize of 25,000 US dollars advertised by hotelier Raymond Orteig for the first non-stop flight from New York to Paris.

Spirit of St. Louis - View of the periscope (right on the cockpit window)

After the successful transatlantic flight, several serious damage to the Spirit of St. Louis was discovered in Paris , such as larger cracks in the covering and a 20 cm long hole in the tank. Since the aircraft was stormed by an enthusiastic crowd after landing in Paris, the damage need not have occurred in flight.

The aircraft hangs from the ceiling in the entrance today as one of the exhibits at the National Air and Space Museum in Washington, DC .

Technical data of the aircraft