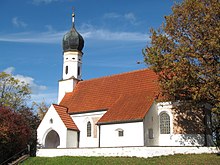 The Roman Catholic branch church St. Ulrich is a late Gothic architectural monument in Blainthal near Taufkirchen an der Vils .

The branch church of the parish of the Birth of Mary (Unterhofkirchen) in Blainthal was first mentioned in a document in 1373. The hamlet was then called Daxmating and later Blumthal . The current church building dates from around 1500 and has largely been preserved. 1670 was next to the new building of the onion turret and the stem through the Erdinger repaired and the side altars master mason Hans Kogler and carried out building repairs. The choir stalls are from 1679. A side altar was set up in 1750 by the Erdinger carpenter Martin Kirscher, which was taken by Johann Michael Rieder, also from Erding. The carvings were by Johann Michael Hierndle. In 1753 a pulpit was built, which was painted by the Buchbacher Joseph Doni Mezole. Both the side altar and the pulpit are no longer preserved. The original church patron was probably St. Martin , who is now a secondary patron. Saint Ulrich has been the patron saint of the church since the 17th century , today alongside Saint Korbinian .

The church is a late Gothic brick building around 1500. The west tower is provided with an onion dome. The tower and the vestibule date from 1670, when the windows were also rounded.

The frescoes, which have since been exposed again, depicting scenes from the life of St. Ulrich date from 1732 and were probably created by the Wartenberg painter Franz Aiglstorffer at the instigation of pastor Johann Georg Kirmair . The high altar from 1754 is considered a “rural masterpiece of the Rococo period”. The painting shows St. Ulrich; St. Martin is shown in the extract . On the sides there are figures of Saints Nicholas and Korbinian. The vestry cupboard from 1615 is considered the oldest in the district .