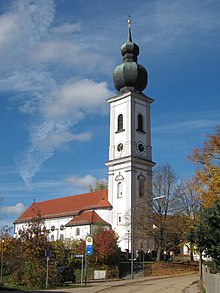 The birth of Mary in Unterhofkirchen

The Roman Catholic parish church of the Birth of Mary is a monument in Unterhofkirchen , a district of the municipality of Taufkirchen an der Vils in the Upper Bavarian district of Erding .

The first written mention probably dates back to November 7th, 819, when a church was given to the Isen abbot Solomon and his sister. Parts of a church building around 1500 have been preserved in the form of the nave walls. The current building dates back to 1699, when the church was expanded and raised by the Erdinger mason master Hans Kogler . The tower dates from 1700. The church was consecrated on July 10, 1708 by the Freising Prince-Bishop Johann Franz Eckher von Karpfing and Liechteneck and the furnishings were added piece by piece in the following years. In 1882 the interior was restored according to plans by the architect Johann Marggraff and the rococo altars were replaced by neo-renaissance altars. The tower was repaired in 1899 and a tower clock was purchased in 1902. In 1908 the nave was extended by three bays to the west. From 1972 to 1979 the church was extensively renovated.

The Nativity of the Virgin is a hall with an attached sacristy and a baroque spindle tower, which is attached to the eastern, recessed and semicircular closed presbytery . Inside the church there is a barrel vault with stitch caps .

The frame stucco work in leaf sticks is believed to come from the sculptor Philipp Vogel. The colored stucco was restored in the 1970s by Ludwig Keilhacker from Taufkirchen.

The original rococo high altar from 1757 is no longer preserved. The master carpenter Matthias Fackler , the sculptor Christian Jorhan the Elder and the Landshut painter Mathias Daburger were involved in this. The current high altar was acquired by Pastor Rupert Aschauer in 1954 and is stylistically dated to the end of the 17th century. It probably came from a side chapel of the Fürstenfeld monastery church . The Neo-Renaissance side altars are from 1882. The figures in the church were taken from the old furnishings. The Pietà and the figures of Saints Florian and Wendelin are also by Christian Jorhan. The figures of the twelve apostles in the choir date from 1737.

The organ donated by Pastor Johann Georg Kirmair in 1728 was replaced in 1883 by a new instrument by Franz Xaver Frosch from Munich, which was rebuilt in 1921. Today's mechanism from 1960 comes from Ludwig Wastlhuber from Mößling . The organ has 18 registers and two manuals behind a three-part flat panel that was taken over from the previous organ .

In 1871 a chime was installed by the Erdingen bell founder Joseph Bachmair, of whom three bells were melted down in 1917 for war purposes. These were replaced by four bronze bells in 1921 . The smallest bell still in existence was handed over to Blainthal .