Bust of Stikkan Anderson in Hova

Stikkan Anderson was born in 1931 as the only child of the single kiosk owner Ester Andersson. During his studies in 1949 he met fellow student Gudrun Rystedt, to whom he became engaged in 1951. They married in the summer of 1955. The marriage had three children: Marie 1957, Lars 1958 and Anders 1966. In 1983 Marie married the Swedish pop singer Tomas Ledin . 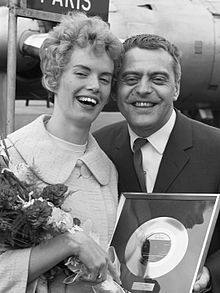 He became known and successful mainly as the manager of the Swedish pop group ABBA . At the end of the 1960s, he signed the ABBA members Björn Ulvaeus and Benny Andersson with Polar Music , Anni-Frid Lyngstad in 1972 and finally Agnetha Fältskog in 1976 , who was exclusively bound to Cupol Records until December 1975. He also wrote some of the early lyrics for ABBA.

Anderson was always the clever, but also authoritarian and dominant figure behind ABBA, who ruthlessly represented his commercial interests towards business partners and also allowed little objection from his employees, the members of ABBA, and ultimately even sought his own advantage in their contracts. On the other hand, he behaved towards contract partners who behaved loyally in the difficult early years of Polar Music, just as loyally for years to come and favored them, sometimes turning down other, more promising contract offers.

He was a partner and at the same time managed the innumerable capital investments, companies, company shares and investments of the enormous financial income of the Polar-Music-ABBA network. In the mid-1980s, he was partly responsible for the loss of a considerable part of ABBA's assets due to mismanagement, bad investments, high tax demands and incorrect borrowing. The collaboration between ABBA members Fältskog, Andersson and Ulvaeus with Stig Anderson was largely ended when it became clear in the course of the dispute with this financial disaster that Anderson had cheated them for years out of royalties of 4.5 million euros, and Lawyers were turned on. A lawsuit against Stig Anderson that had already been filed with the Stockholm District Court by Agnetha's company “Agnetha Fältskog Production AB” and Benny's company “Mono-Music AB”, as well as a Dutch company holding Björn's rights, became a complete disclosure of the financial activities of all parties involved had brought, ultimately withdrawn and ended the matter on the way of settlement.

In 1990, Anderson sold Polar Music with almost all the exploitation and licensing rights to the ABBA brand for an unknown sum of money to the media group Polygram .

He died of heart failure in the summer of 1997 . Except for Agnetha Fältskog, who was ill at the time, all former ABBA members attended the funeral.

On May 7, 2007, the double CD Text: Stikkan Anderson was released exclusively in Sweden with 43 tracks, which Stig Anderson either composed or for which he wrote the lyrics. The performers featured on the CD include many stars of the Swedish music scene such as Monica Zetterlund , Siw Malmkvist , Lill Lindfors , Lill-Babs , Harry Brandelius and ABBA (solo and as a group).