Book of hours of Philip the Bold

The book of hours of Philip the Bold is a so-called horarium that belonged to Philip II , the Duke of Burgundy . This politician, eager to settle the affairs of the French crown in his favor, found time to hear Mass every day and took his book of hours, rosary, and portable reliquary with him on all his travels. The portrait of Mary , which shows traces of touching and kissing , was evidently venerated by him like an icon . 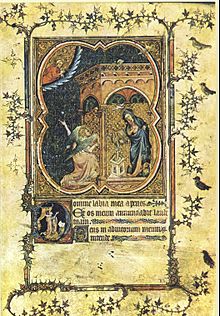 Annunciation , Philip looks up to Mary

The Cambridge prayer book is very similar in style and outward appearance to two other books of hours created for Philip the Bold, which are now in the Bibliothèque Royale in Brussels . These three books are continuous volumes with supplementary texts because there is no repetition of the text of the Fitzwilliam manuscript.

Based on stylistic features, it can be determined that his book of hours was written in Paris around 1370, a few years after he had become Duke of Burgundy. As owner he is confirmed by heraldic and documentary evidence, although the heraldry is almost completely obliterated in the picture above. A shield with traces of the Burgundian colors red and blue is just visible and the outlines of two lions as shield holders. The small kneeling figure beneath a golden curtain in front of a tapestry decorated with heraldic lilies in the initial D above "Domine, labia mea aperies" can be identified as Philip himself. He looks up at the Virgin Mary in miniature, who stands in a typical Gothic posture in a portico in front of a similarly patterned curtain. The Archangel Gabriel , who comes from the left as usual, points with a dramatic gesture up to God the Father and the angels .

The miniatures in Philip's Book of Hours come from two artists. The first to paint the scenes of the calendar and ten of the eleven large miniatures was identified by Eric Millar as Maitre aux Boqueteaux . The second artist belongs to the same workshop and is a little less skillful. The Maitre aux Boqueteaux got its name from the umbrella-like groups of trees that are a characteristic feature of his works. His miniatures are mostly in quadrilateral frames, with small scenes at the foot of the page. These baseboards are painted in a particularly delicate manner and show a great love for animals.