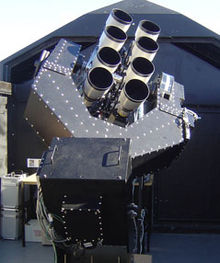 The 8 lenses in their mount

The SuperWASP project is an automatic search engine for extrasolar planets . The European project stands for Super Wide Angle Search for Planets .

Every night, the cameras are supposed to take around 800 images that are exposed for 35 seconds each .

The brightness of the stars should be determined between 7th and 13th magnitude with 1 percent accuracy (0.01 magnitude classes).

It is hoped that the analysis of the measurements over time will lead to several discoveries of exoplanets that are passing in front of their respective sun and thereby weakening its light . In the meantime, the number of planets newly discovered by the SuperWASP project has risen to over 180 (list in English version).

WASP 142b is also represented, a planet that the then 15-year-old Tom Wagg discovered during an internship at Keele University. The find was confirmed two years later in 2015.

Projects to search for exoplanets